A number of Iranians living here have had their accounts abruptly terminated by United Overseas Bank (UOB) with no explanation but some suspect it is linked to the United States re-imposing sanctions on the Middle Eastern nation.

The terminations have forced those affected to change banks or rely on safety deposit boxes.

Mr Roohid Novinrooz, who turned 30 on May 23, received an unpleasant surprise that day in the mail: a letter from UOB saying that his personal savings account would be terminated. Said the Iranian user experience (UX) designer, who is married to a Singaporean and moved here last year: "They told me that my account would be closed in a week, and all my savings were given to me as a cheque under my name. I tried to ask why, but no one could give me a reason."

He is not alone. At least 10 other Iranians here have had their accounts terminated by UOB with no reasons given, The Straits Times has learnt.

Many believe it is linked to the bank's assessments of risks stemming from the re-imposition of sanctions against Iran by the US.

Mr Novinrooz said: "I have no dealings with the Iranian government or other Iranian entities at all, and this account is used only for personal matters here." 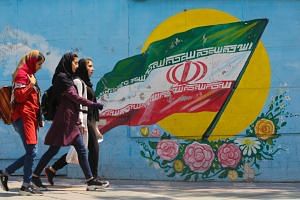 Iranians brace for harder times as US oil sanctions close in

When Dr Javadian, 34, queried UOB, he was told that the reason for the termination fell under a clause in the card account agreement. This states that his account may be cancelled if the bank has to meet obligations in connection with activities such as money laundering, terrorism or enforcing sanctions.

Dr Javadian has since opened an account with POSB without any problems. "It's puzzling to me as different banks here seem to have different policies," he said.

An Iranian travel agent, who wanted to be known only as Mr Amin, said the closure of his UOB business account affected operations at his company. "We can use only cash and store it in a safety deposit box for now," he said.

Mr Amin, 37, had approached other banks to open a business account, including ICBC bank and the Bank of India, but was rejected.

It is not clear if OCBC, which was reported last year to have terminated some Iranian accounts, has done so again this year.

There are about 500 Iranians working and studying here, The Straits Times understands.

A UOB spokesman did not reveal how many accounts held by Iranians have been cancelled but noted that its procedures involve reviewing accounts periodically and this can lead to closures.

A Monetary Authority of Singapore (MAS) spokesman said banks decide on opening or maintaining an account as they bear the risks and costs of managing those relationships. "This includes the operational risk of infringing sanctions that have been imposed by other countries," he noted.

MAS also noted banks cannot open or maintain accounts with specific people designated by the United Nations. Some Iranian individuals are on the UN-designated list. A Straits Times check found that Mr Novinrooz, Dr Javadian and Mr Amin are not on the UN list. They also said they do not have any dealings with entities on the list.

Corporate lawyer Robson Lee of Gibson, Dunn & Crutcher said banks are not obliged to disclose reasons for account closures: "They have their own mechanisms for detecting risks and it is not industry practice to disclose such procedures."