SINGAPORE - Most students interviewed by The Straits Times (ST) have welcomed the move to award bonus university admission points for their first choice of a major.

The change was announced on Monday (Feb 26) by National University of Singapore (NUS) senior deputy president and provost Ho Teck Hua, who said it aims to give students who pursue their passion a leg-up in the admissions process.

With the change, students applying for a place at the university will be given 1.25 bonus points for their first choice course, giving them a slight advantage and encouraging students to prioritise the subject they are most passionate about.

Seven of the 10 students interviewed by ST supported the move.

Eighteen-year-old Charlotte Chong, who plans to apply to the Faculty of Arts and Social Sciences, said the move is "pretty good".  She added: "The 1.25 bonus points can really help someone get into their dream course if they only missed the cut-off mark by a little."

Nanyang Junior College alumni Shantini Rajasingam, 18, said: "It's a good signal, especially for kids who perhaps don't do as well academically and feel like they'll always lose out to academically better students."

However, some students expressed reservations, particularly noting that it may come at the expense of certain candidates.

Anderson Junior College graduate Aseera Shamin, 18, said: "If someone puts their first choice to be a more competitive course in hope that they may get in and fails, it would be even harder to get into their second option." 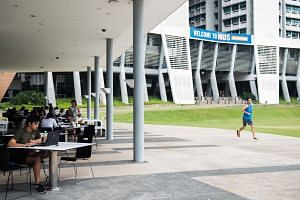 NUS applicants to get bonus points for 1st-choice courses

Opportunity for students to pursue passions

Aseera, who hopes to study political science, also expressed that choices are not necessarily a true reflection of passion, and suggested that universities use personal statements as a more suitable alternative.

Another concern is that prospective students, who often apply when they are aged 18 to 21, may not be entirely sure of what they want to do. This was brought up by Hwa Chong Institution graduate Chua Zheng Hong, who said: "It's so hard to decide which course to choose. This might add extra stress."

Many junior college graduates are currently making decisions regarding university applications and the recent changes could have implications on the path that some choose to take.

Another key change introduced by the NUS on Monday was the addition of 86 double major programmes.

This was met positively by students, with many citing increased variety of course choices and relevance of a multi-disciplinary approach to the real world as major plus points.

Lee Wen-Yi, 18, said: "With the world becoming increasingly interconnected, it's useful for us to be able to approach a problem from different perspectives. Expanding the number of double degrees could cater to that."