SINGAPORE - More than 100 university students have come out in support of food delivery riders affected by the recent ban on electric scooters and have called on the Government to take riders' suggestions on board.

In a letter sent to media outlets, the students also urged food delivery companies to provide these workers "support and protection during this precarious period".

It was announced earlier this month that e-scooters will be banned from footpaths in a bid to address public safety concerns.

The ban will be extended progressively to other motorised personal mobility devices (PMDs) in the first quarter of next year, including hoverboards and unicycles.

The ruling has galvanised food delivery riders - many of whom depend on such devices - to turn up in droves at Meet-the-People Sessions to plead their case. A rally to discuss the issue is scheduled to take place at Hong Lim Park next weekend.

The students' letter noted food delivery workers have irregular incomes that are heavily dependent on their daily effort while they lack formal workers' associations despite the "dangerous traffic-facing nature of their jobs".

They urged the Government to continue engaging with these workers and to make "appropriate revisions to the policy".

"We hope that the government can take in suggestions from the deliverers such as implementing a mandatory licensing regime for PMD deliverers, an extended probation period for the ban, and also look at improving the road infrastructure to better accommodate these riders in the long term," they said.

They added that food delivery companies could consider increasing commissions to offset the loss of income caused by delivery workers switching to slower modes of transport.

"This would also incentivise errant riders to not engage in unsafe behaviour to compensate for a potential loss in earnings," they said. 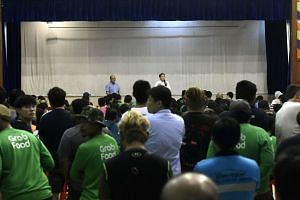 The letter was drafted by a group of current and former National University of Singapore (NUS) students, who gathered signatures by circulating the letter among their friends over the course of about a week.

Many of those who signed were from the National University of Singapore's faculty of arts and social sciences, with others from different faculties and universities as well as former and prospective undergraduates.

The students said they do not plan further action apart from the letter, although those who signed it are encouraged to express their individual views to their respective MPs if they wish.

The students also appealed for members of the public to empathise with food delivery riders, noting that it is not always feasible for them to switch jobs.

A recent survey commissioned by The Sunday Times found that half the food delivery riders and ride-hailing drivers here earn a monthly household per capita income of $1,500 or less, putting them in the bottom third of Singapore's workers. One in four did such gig work on a full-time basis.

NUS undergraduate Lune Loh, who signed the letter, said the ban was a "classist act of economic violence" given the socio-economic background of many food delivery workers.

"This regulatory move is depriving them of their livelihoods, especially in a country that has little socio-economic mobility," added Ms Loh, 22. "Many do not have the privilege to afford the time to switch jobs or afford more expensive forms of transportation."