At global youth summit, they are also encouraged to disconnect from devices and build real relationships

Top voice artist Pocholo Gonzales has empowered youth in his native Philippines by giving them a channel to air their concerns about social issues on radio shows.

Although technology is helpful, too much of it can do no good, the motivational speaker told about 500 students yesterday, adding that their actual presence is more impactful.

Other motivational speakers and educators also called upon the student leaders from secondary schools, junior colleges, the Institute of Technical Education and international schools, along with youth delegates from Asean nations, to show kindness and serve the community.

The annual summit was launched in 2009 to develop students' leadership skills and promote cultural and youth diplomacy.

The Character and Leadership Academy (CLA), a youth development charity which organised the summit, also launched a new movement called Be Kind To Every Kind, which calls upon young people to be compassionate to people, wildlife and the environment. 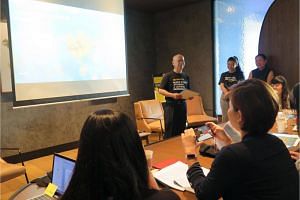 Young people are too embarrassed to show kindness in public: Poll

Senior Minister of State for Culture, Community and Youth Sim Ann, the guest of honour at the summit, urged the students to disconnect from their digital devices and instead, build authentic relationships. "This simple habit will help us to see and empathise with the needs of those around us - including people with disabilities, the vulnerable, and the lonely elderly," she said.

The 2016 National Youth Survey found that nine in 10 young people consider helping the less fortunate and contributing to society as important life goals.

But the summit's organising chairman Delane Lim, who is CLA's executive director, hopes every young person in the country will pay it forward with simple acts of kindness.

That propelled the 33-year-old to start the My Dollar Story campaign last month, in which Singaporeans are encouraged to use a dollar each to perform a kind gesture.

At the end of the year, CLA and marketing and communications firm Crowd will publish an anthology that records the kind acts of 200 individuals.

The cover design for the book, also titled Be Kind To Every Kind, was unveiled at the summit by Ms Sim.

Yesterday, the student leaders had the chance to put what they learnt into action by buying groceries for the elderly who live in one-room rental flats in Bedok North with money from the summit's sponsors.