SINGAPORE - To tackle the problem of fake news, student Liu Haohui hopes the algorithm she has developed could help verify the reliability of news stories.

Using machine learning, the algorithm can correctly predict whether an article is real or fake with a success rate of more than 90 per cent - comparable with other detectors used in the United States.

She tested it against local fake news articles, such as the one which attributed fabricated comments to Deputy Prime Minister Tharman Shanmugaratnam to solicit bitcoin investments last year, as well others from traditional news outlets.

"I hope this algorithm could be developed into a Web browser extension or smartphone app, so that it provides an additional means for people to check the likelihood of an article being fake before sharing them," said the 17-year-old student from Raffles Institution.

Her project will be one of the six representing Singapore at the Intel International Science and Engineering Fair in Arizona, United States, next month.

Her algorithm was among projects showcased at the Young Defence Scientists Programme (YDSP) Congress on Thursday (April 18), co-organised by Defence Science and Technology Agency (DSTA) and DSO National Laboratories. 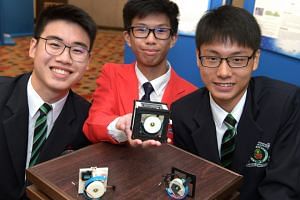 Defence is a field in which we can innovate, says Minister

The one-day exhibition at the Marina Bay Sands Expo & Convention Centre was the culmination of the past year's YDSP activities, such as camps and lectures.

More than 350 students from 19 junior colleges, integrated programme and secondary schools took part in the activities.

At the event, Senior Minister of State for Defence Heng Chee How said in a speech that the YDSP, which began in 1992, has provided a platform for youths to discover the importance of technology and its role in the defence of Singapore.

He added that in an uncertain security landscape with new emerging threats, Singapore faces the constant challenge of preparing and equipping the Singapore Armed Forces to meet future operational needs.

Autonomous systems to keep soldiers safe, looking for opportunities in outer space, and making the cyber domain more secure are some areas that can be explored further, he said.

He said the defence technology community has been instrumental in delivering innovative solutions that meet Singapore's needs.

"Defence is not something we can rely on others for. Others do not have the incentive nor the inclination, when push comes to shove, to make sure we exist or prosper," he said.

The defence technology community comprises around 5,000 scientists and engineers from the Ministry of Defence, DSTA and DSO.

Haohui's mentor Ryan Tarn, a senior engineer at DSTA's National Security Programme Centre, said: "Haohui's project has many real-life benefits and is just one of the many possibilities of how data analytics can be used in the context of national security."

Another project that will be representing Singapore at the fair in Arizona is a waxed paper parachute prototype that can be used to deliver supplies to disaster-stricken areas.

Compared to conventional parachutes, this one is an original design that is cheaper to produce, lighter and more bio-degradable, said student Natalie Elizabeth Yam from Anglo-Chinese School (Independent), 17.

The use of origami-folding techniques ensure that the parachute can be deployed automatically when released from the air.

"I would make origami for my friends when I was eight years old. This background helped me understand the project better," she said.