SINGAPORE - The blood that seeped through the ceiling of a Tampines Housing Board flat last Tuesday (Jan 29) - and later led to the body of an elderly man being found in the unit above - was not due to an issue with the ceiling's structural integrity.

Rather, it happened because of the porous nature of the concrete ceiling, Tampines GRC MP Baey Yam Keng told The Straits Times on Monday.

"So there should not be anything wrong with it. Only the toilet area would have a waterproof membrane in the ceiling to keep water from passing through," he said.

Mr Baey was giving an update on the case in which a 77-year-old man was found dead in a Tampines Street 43 flat and the blood from his decomposing body had seeped through the floor and dripped from the ceiling of his neighbour's unit below. Mr Baey added that he had seen similar cases before.

The neighbour, who wanted to be known only as Ms Jamilah, made the grisly discovery last Tuesday morning after noticing a strange smell in her flat that she traced to the dark red liquid dripping from the ceiling of her master bedroom.

The police were called after that and later said subsequent investigation revealed that the man had died of natural causes.

The ceiling of Ms Jamilah's master bedroom has since been repainted, said Mr Baey in an Instagram post on Sunday, adding: "Although it was not a pleasant experience, Ms Jamilah took it in her stride."

Mr Baey told The Straits Times that HDB repainted Ms Jamilah's ceiling on Saturday, and when he visited her on the same day, it "looked as good as new".

The repainting was done out of goodwill by HDB, and could only be done when the blood had stopped dripping and dried. 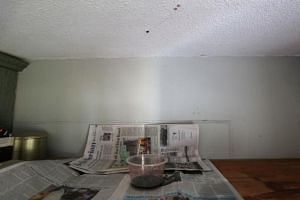 He visited the wake of the 77-year-old man, known only as Mr Ho, on Saturday and spoke to his family.

In his Instagram post, Mr Baey said: "According to his children, their father had died of a heart attack and they were looking forward to their weekly family dinner on Jan 30."

Mr Baey told ST that the late Mr Ho insisted on living alone as he had not wanted to leave all his good friends in the neighbourhood, which he would have to do so if he moved in with his children.

"He had a very active social life and would spend evenings and nights drinking with his friends at the coffee shop," said Mr Baey.

"His children told me that his drinking (friends) and even some of the beer promoters came to pay their respects at the wake."