Law graduates will face a more stringent professional Bar exam from 2023 as well as lengthier training before they can qualify to practise law.

The "significant restructuring" of the professional training regime for lawyers was announced yesterday by Chief Justice Sundaresh Menon during this year's mass call, a proceeding that formally admits lawyers to the Bar.

The recommendations, which have been accepted in principle by the Ministry of Law (MinLaw), were made by a committee he appointed two years ago to conduct a "root and branch" review of how undergraduates are offered training contracts by local law firms, as well as how they are assessed to be suitable for retention and employment.

Under the current regime, law graduates have to go through a six-month course and pass the Singapore Bar exam, known as "Part B", and then complete a six-month training contract with a local law firm, in order to be called to the Bar.

Currently, admission to the Bar is synonymous with being qualified to practise law.

However, the new regime proposes to uncouple admission to the Bar from the completion of the practice training contract.

This means law graduates who pass Part B can be admitted to the Bar without the need to undergo practice training. PRACTICAL TRAINING NOT A MUST

This proposal recognises that a person who has studied law can contribute to society without becoming a practising lawyer, and that it is not necessary for those who choose to pursue different pathways to first complete a period of practical training before they start work.

These graduates can go on to alternative careers, including being in-house counsel, law academics, practice support lawyers, public servants and legal technologists.

"This proposal recognises that a person who has studied law can contribute to society without becoming a practising lawyer, and that it is not necessary for those who choose to pursue different pathways to first complete a period of practical training before they start work," CJ Menon said in his speech.

Those who want to practise law will still need to complete a practice training contract, which will be lengthened from the current six months to one year. This will allow trainees to develop a strong foundation for a sustainable and fulfilling career, said the Chief Justice.

At the same time, the standard of the Part B exam will also be raised, to keep the bar high, and the scope reviewed to include topics relevant to lawyers practising in the current environment, such as technology.

The committee, chaired by Justice Quentin Loh, was formed against the backdrop of a shortage of practice training contracts in the industry.

However, the committee said in its report, completed in March, that it focused its attention on strengthening the training regime, rather than addressing supply and demand issues and interfering directly in the market.

According to MinLaw, one in five of those who were called to the Bar last year did not go on to practise law. About 690 law graduates, from both local and overseas universities, enter the job market each year. Last year, more than 90 per cent secured training contracts, said the ministry. 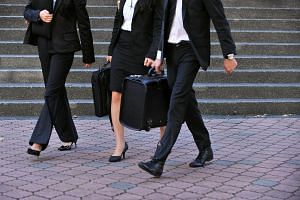 In his speech, CJ Menon also exhorted the newly minted lawyers to be passionately curious about developments outside the law, to be courageous in treading new ground and to find creative solutions through technology.

He also spoke about the importance of role models, singling out former Law Society president Peter Cuthbert Low for his courage to represent unpopular people, his commitment to public service and being an inspiring mentor to young lawyers.

More than 450 lawyers will be called to the Bar this year over three sessions.