SINGAPORE - The Manpower Ministry (MOM) on Thursday (May 12) announced stiffer penalties for companies found lacking in workplace safety and health standards, including increasing the minimum time for companies ordered to stop work.

Stop work orders will now last at least three weeks, up from two weeks previously. Companies slapped with a stop work order or found with a workplace fatality will be placed under the Business Under Surveillance (BUS) programme, which will now be harder to exit from.

They also risk having their work pass privileges temporarily curtailed, making them unable to hire new foreign workers until they have addressed their safety issues.

Minister of State for Manpower Sam Tan said the move was in response to the spate of workplace fatalities this year. There have been 28 so far this year, a 30 per cent increase from the same period last year. 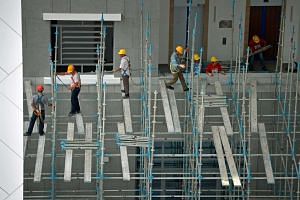 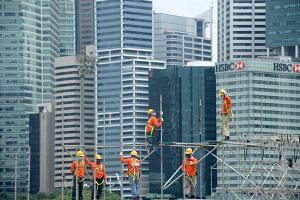 Speaking at a surprise construction site inspection at Geylang Road, Mr Tan said: "Despite enhanced enforcement...the number of worksite incidents and fatalities is climbing, so we are very, very concerned about this situation.

"One reason could be that companies and workers, as well as safety supervisors, are not taking enough ownership of workplace safety and health responsibilities."

He said that a stop work order can affect a company's profits significantly, as its project deadline will be delayed and the developer will impose damages.

He stressed, however, that safety remained paramount. "If companies don't take safety seriously, we can't take their commercial interest seriously."

The Geylang Road worksite, which lies between Lorong 19 Geylang and Lorong 21 Geylang, was issued with a stop work order after MOM's inspection for various safety infringements, such as not having barriers installed around the edges of higher floors to prevent falls.

MOM declined to reveal the name of the company.

New conditions for lifting stop work orders include compulsory refresher training on all areas of weakness, as well as a re-evaluation of the site's work safety and health management system by approved external auditors.

It will also now be harder for poorly performing companies to exit the BUS programme, as they will have to get workers to do last minute risk assessment, as well as submit a continual improvement plan in order to be taken off the list.

There are currently 26 companies on BUS, with more than 500 having gone through the programme since its launch in 2006.

Mr Tan also said that the ministry will join forces with the Workplace Safety and Health Council to offer free support to companies who need help in improving their WSH systems.

Under the new Safety Compliance Assistance Visits Plus (SCAV+) programme, certified WSH professionals will work with the companies' management to identify lapses and recommend measures to reduce risks.

It is now in the midst of Operation Harrier, an enforcement operation which started in April and will run to the middle of May.

Under the WSH Act, companies that fail to take reasonable measures to ensure their workers' health and safety can be fined up to $500,000 for the first offence.