Members of the Malay/Muslim community are its "assets" and by volunteering to mentor the younger generation, they can help uplift the community, said Minister-in-charge of Muslim Affairs Masagos Zulkifli.

He urged more community members to come forward, as their participation would determine the success of efforts from the collaboration of the Islamic Religious Council of Singapore (Muis), self-help group Mendaki and the People's Association Malay Activity Executive Committees Council (Mesra) - popularly known as M³.

Mr Masagos, who is also Minister for the Environment and Water Resources, said: "You have a wealth of experience that can inspire and encourage our young. For example, your stories as 'mentors' will inspire them to take the long view of where they wish to go, beyond the twists and turns of the road ahead.

"The younger generation needs role models whom they can emulate. You have the ability to guide them on how to build professional networks and widen employment opportunities."

The minister was speaking during the debate on the budget of the Ministry of Culture, Community and Youth yesterday.

He was responding to MPs including Mr Saktiandi Supaat (Bishan-Toa Payoh GRC) and Mr Faisal Manap (Aljunied GRC), who asked about the progress and plans for M³.

Mr Masagos gave updates about M³@Town, an initiative to bring community programmes to the heartland and create opportunities for community members to volunteer and serve people in their neighbourhoods.

Update on M3 (a collaboration between MENDAKI, MUIS and MESRA) to uplift the Malay-Muslim community

Currently only in Tampines and Pasir Ris-Punggol, M³@Town will be rolled out in six more towns this year: Bedok, Choa Chu Kang, Jurong, Marsiling-Yew Tee, Nee Soon and Woodlands, said the minister.

He added that the People's Action Party Malay/ Muslim MPs will be "leading efforts" in M³@Town. 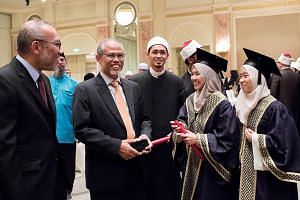 "They have brought the M³ agencies together in their towns and mapped out the needs, assets and community programmes at our community centres, mosques and Mendaki satellite centres. They have also begun to mobilise volunteers across M³," he said.

He also said Muis is working closely with Madrasah Wak Tanjong's new management board on an assistance package to enhance its programmes and "contribute multiple perspectives to guide the madrasah".

In a separate speech in the same debate, Minister of State for National Development and Manpower Zaqy Mohamad announced that Mendaki has been appointed by the Early Childhood Development Agency as the pre-school outreach agency to reach out to Malay children, in order to strengthen school-readiness in the community.

He was responding to Ms Rahayu Mahzam (Jurong GRC), who asked how the Government was strengthening pre-school outreach and support for the community.

In making this announcement, Mr Zaqy noted that research has shown that language acquisition and development are most sensitive at younger ages and, thus, enrolment and regular attendance at pre-schools are critical.

"We want to raise awareness among families of the importance of pre-school education and the need for regular attendance, and assist them in enrolling their children into pre-school and related Mendaki programmes," he said.