For the last six months, Mr Fabian Tan and his family have been forced to cope with a strong smell of sewage in their new $910,000 executive condominium (EC) unit.

The smell comes from the master bedroom toilet of the fifth-floor unit at the RiverParc Residence in Punggol.

Workers sent by developer Qingjian Realty removed the bathtub and hacked the toilet walls last month to try and find the source of the stench - but to no avail. 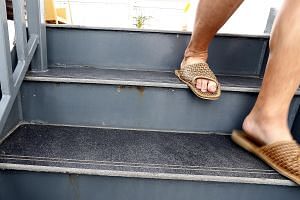 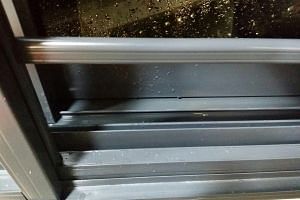 The bathtub has been left in the living room balcony, putting the master bedroom toilet out of use.

Since then, the family of eight and their domestic helper have had to share a single toilet. They also use air fresheners and reed diffusers to try and mask the stench.

"It's been miserable for us," Mr Tan, a 42-year-old who works in shipping, told The Straits Times. "Sometimes, I can't even sleep at night because of the smell."

And it also means a long wait for the toilet in the mornings, as well as the evenings when family members return from school and work.

"Even if each of us takes 10 minutes to shower, it will take 90 minutes before we all finish," said Mr Tan, who lives with his wife, a 41-year-old secretary, four children aged between seven and 13, his parents who are around 70 years old, and a maid.

They lived in a five-room Housing Board flat in Punggol before moving into their new four-bedroom EC unit in January.

Even then, Mr Tan noticed the smell but thought at first it was coming from a nearby facility where people can fish for prawns.

But it got worse, and Mr Tan contacted the EC's defects team in March. Even after more than five visits by the developer, no solution was found.

A spokesman for Qingjian Realty, a Chinese developer which has numerous EC projects under its belt including Ecopolitan in Punggol and Bellewaters in Sengkang, said: "We regret that we have so far failed to detect the source of the foul smell despite numerous efforts.

"We will work with our consultants and professionals to resolve this, and trace the source of the smell," he added, pointing out there were no similar complaints from the two units directly above and below .

A few RiverParc Residence home owners told The Straits Times that they have also experienced a foul smell in their units from time to time. Logistics manager Erin Ng, 42, who lives on the 17th floor, sometimes smells a stench from a cabinet below her kitchen sink or from an outlet pipe for her washing machine. 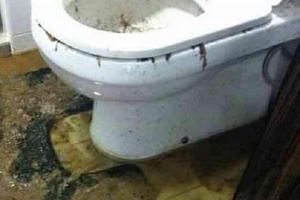 She said: "I remember it was especially bad during the Chinese New Year period and I could not invite anyone over."

Mr Tan has asked the developer to relocate his family for the time being, while it fixes the issues in his toilet. "I paid so much for the unit hoping that my family can live in a comfortable environment, but this is really frustrating."