SINGAPORE - Singapore was neither a sleepy fishing village, nor filled with lazy natives 700 years ago. Debunking these myths, former senior minister of state Zainul Abidin Rasheed said that five centuries before the arrival of Sir Stamford Raffles, the island was already a bustling trading centre called Temasek, open to business and to traders of all races.

Speaking at Nanyang Technological University's (NTU) Bicentennial Conference on Friday (Oct 18), he said the same openness to people, new ideas and perspectives will stand Singapore in good stead for the future.

He pointed out that while the Singapore Constitution recognises the indigenous position of Malays, this did not prevent the country from welcoming the Chinese, Indians, Eurasians and other immigrants. Even as right-wing and isolationist movements grow across the world, he said, Singaporeans must "not lose our heads when many are losing theirs - that takes some character".

"We do so not only because we are a young nation with a small population, but also because we truly believe in hospitability and appreciating the contribution of others."

He said that public housing, a British legacy, is another area where the Republic has shown it can be adaptable and inclusive. "Our founding fathers saw the merit of public housing not merely as an obligation to our citizens, but also as a long term tool for nation building... it forges a common identity among people of different creeds," said Mr Zainul.

Elaborating on this, fellow speaker and pioneer urban planner Liu Thai Ker said that Singapore's urban transformation, from Housing  Board towns to its Central Business District, did not come by "luck or accident" but through careful planning.

Conservation districts like Chinatown and Kampong Glam were also designed to give different ethnicities the room to express their culture and celebrate festivals.

Mr Liu added: "By 1985, there were no more squatters, ghettos and ethnic enclaves. I can't think of any other city that has achieved that. 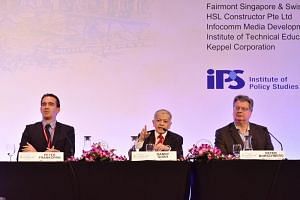 History shows the path to success is not plain sailing

Key to this, he said, is identifying and anticipating needs and problems, and creating long term plans that deploy intelligent solutions.

Addressing around 100 academics and policymakers at the two-day conference, Mr Zainul, who is also a board member of NTU, said that openness and connectivity are core principles of Singapore's international engagements.

When China was opening up in the 1980s, projects like the Suzhou Industrial Park (SIP) showed the world that Singapore could partner a large economy like China to mutual benefit. Since then, it has seeded other government-to-government projects like the China-Singapore Chongqing Connectivity Initiative (CCI), he said.

These have evolved in focus from providing hardware, such as infrastructure and investments, to software such as know-how and coordination among multiple parties.

Singapore, he added, can continue to be a good interlocutor and partner. "How we manage the challenges as we embrace the opportunities, will determine our future and who we are as a nation."