But when the chance for a fourth came this year, he jumped at it.

The pre-press assistant foreman at Singapore Press Holdings (SPH) is one of two staff aboard The Straits Times' (ST) bicentennial float at this year's parade.

The national paper is 174 years old this year.

Seven other organisations, such as Singapore Post and Singapore General Hospital (SGH), which have also played significant roles in building Singapore, will have their own floats as well.

The floats are part of a segment marking Singapore's bicentennial.

Mr Swee said: "It's been quite a while since I took part in a National Day Parade. There is a lot of nostalgia this time, and it is my first time in a parade held at the Padang." Participants on the floats, dressed in the outfits of their predecessors, have been rehearsing every Saturday since last month.

Mr Swee, who has been with SPH for 19 years, will wear a typesetter's uniform - comprising a white shirt, a bow tie and an apron - on the ST float, which depicts a printing press in the early days of operations. 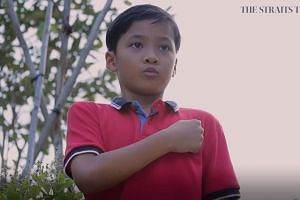 Highlights to look out for at NDP 2019

In the past, typesetters would lay out letters to form text to be printed on newspapers.

Technology has changed this aspect of the job, but Mr Swee enjoyed his foray into history.

"We were jokingly comparing the uniforms and saying that it is better than what we are wearing now," he said.

SingPost branch manager Sim Boon Soo, 68, will be on the SingPost float, which showcases various aspects of the company in its early days 160 years ago.

These include a colonial letterbox and a mail ship.

Madam Sim, the longest-serving female front-line staff at SingPost, with 46 years at the company, said: "I was quite intrigued by the ship segment and that a cannon would be fired to signal the arrival of a mail ship."

SGH's float, which features the hospital's iconic clock tower, will have a doctor and three nurses on board. The doctor, Associate Professor Henry Ho, 46, is head of the urology department at SGH.

He said: "The experience has been absolutely fun, and the key thing is that we get to meet people from different walks of life."

NDP co-set designer Deric Shen, 31, said the team behind the floats did its research using resources from the library, national archives and the organisations themselves.

"We wanted to bring history to life and present what the lifestyle was like in the past," he said.

Mr Shen added that the NDP team wanted to share the details of defence, social and economic development since "the beginning of the whole Singapore story".