These numbers were given by the Police on Friday (Nov 9) when it launched its year-end crime prevention campaign at Ang Mo Kio, with a strong reminder to people to stay vigilant, especially against e-commerce scams, in the upcoming festive period.

With shopping crowds surging during the Christmas and New Year season, the police reminded people to also be alert and not fall prey to outrage of modesty.

Said Mr Gerald Singham, chairman of National Crime Prevention Council: "We should not forget that criminals are still out there."

The rise in loans scams could be linked to illegal moneylenders going digital and sending people unsolicited Whatsapp messages and putting out online advertisements with such phrases as "cheap loans and "low interest rates".

People who respond are often instructed to transfer money as a deposit before they can get the loan. After making the transfer, scammers may no longer contactable.

Other frauds on the rise in the first nine months of this year (2018) are: e-commerce scams and China officials impersonation scams.

With China officials' impersonation scams, victims lost $9.1 million, which is about 50 per cent more than the $6 million reported. 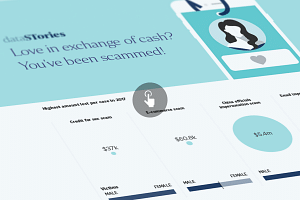 In these cases, victims will receive calls from people posing as "China officials" who would demand for their personal particulars, including their passport number and bank account details to settle purported crimes they are accused of committing, include sending parcels containing fake passports or weapons.

But one common scam has dropped during this same period: Internet love scams. Victims lost $18.1 million this year, a 40 per cent plunge against the $30.1 million reported.

At Friday's event, five remittance companies were given tokens of appreciation for helping the police fight scammers.

Samlit Moneychanger's director Novianti, who goes by one name, helped save a woman from losing $10,000 last month (October).

Ms Novianti, 37, said: "When I asked her who the money was for, she said it was for a man whom she met on WeChat but had never seen in person before."

Ms Novianti informed the Commercial Affairs Department and a police officer came to her shop in Chinatown to inform her about the prevalence of Internet love scams.

Samlit Moneychanger helped customers save more than $100,000 from scammers since the start of the year.