SINGAPORE - An integrated transport hub featuring a bus interchange and an MRT station with decommissioned buses and trains will be among the buildings expected in a state-of-the art military training facility to be built in western Singapore.

Along with buildings resembling a hotel, hospital and shopping centre, and road networks that are configurable, the features in the new Safti City aim to provide varied, realistic and challenging scenarios for Singapore Armed Forces (SAF) troops.

Expected to be about the size of 100 football fields, Safti City will also feature smart technologies such as targets that can "shoot back" at training troops and simulated battlefield effects like the use of smoke and loud sounds.

To enhance training realism and effectiveness, the real-time actions of training troops will also be collected, and then collated and processed by a data analytics system to provide accurate feedback and aid in improving performance.

"When completed, Safti City promises to be among the most advanced purpose-built military training facility for urban ops in the world," said Dr Ng.

The construction of the first of two phases for the 88ha, $900 million Safti City - jointly developed by the Singapore Army and DSTA - will begin soon, and it will open progressively from 2023.

When he announced plans for Safti City in 2017, Dr Ng said that the entire training area would be completed in 10 years. No timeline is available yet for the second phase of the project - located near Poyan Reservoir - as it is still in the planning stage.

Virtual reality video of the transport hub in Safti City

For the first phase, the buildings and road networks will be configurable to provide varied training. It will also have battlefield effects simulators, such as smoke when a target is hit, as well as semi-autonomous targets on patrol.

The tallest building at the Murai Urban Training Facility, where urban operations training are currently conducted, is four storeys high, while Phase 1 of Safti City will have three 12-storey blocks, among some 70 buildings. This allows soldiers to train in shooting at an angle that is currently not available. 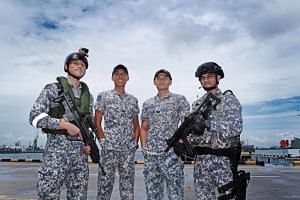 Dr Ng said that since Singapore's independence in 1965, Safti has been the spiritual home of the SAF, as the beginnings of the SAF took shape there.

He said that the decision to invest considerable sums in training in the early days proved "prescient and precious", as the British announced they were pulling out of Singapore a few years later.

It is in this same spirit and belief, he said, that Mindef is now investing in Safti City, which will cost around $400 million in capital investments.

"I believe that this investment in Safti City will pay many times over, in preparing our soldiers to be effective in protecting Singapore and themselves in these missions," he said.

Safti City will also have buildings that are meant to replicate amenities such as a museum, a school, and an office with a multi-storey carpark, which is in line with the change in the likely battlefield for a new generation of Singaporeans.

Dr Ng said the chances of the SAF fighting in jungle operations have diminished considerably while the odds that it will be called into operations in built-up areas, whether it is for peacekeeping, humanitarian assistance and disaster relief, or other types of operations, have gone up.

He cited the Marawi conflict in the Philippines in 2017, where terrorist snipers inflicted casualties on security troops and hampered efforts to take back the city.

He added that the Philippine military had asked the SAF for assistance in urban operations training, recognising that it was one area in which they had under-invested.

Together with the facilities that the SAF is jointly developing with the Australian government in Queensland, this will prepare troops to conduct a wide range of operations, in all types of terrain, said Dr Ng.

He said that even with the best training facilities in the world, nothing can replace the values of resilience, persistence, and a passion for excellence.

"I think even as we build these facilities, whether in Safti City, whether in Queensland, we must never forget that above all, values undergirth our SAF. And in order to derive maximum benefit, even from world-class facilities, you need leadership, the right values and sacrifice as the necessary ingredients to make Safti City work," he added.