SINGAPORE - Stargazers, you're in for a treat.

The planet Jupiter is set to be at its brightest in June, and from Friday (June 14) till Wednesday, it will also form up in a straight line with Saturn and the Moon - a rare occurrence that will be visible to the naked eye.

While the giant planet is visible throughout the year, Jupiter is closer to the Earth in proximity once every 13 months, a Science Centre Singapore spokesman said on Saturday.

It is likely to appear as a "bright dot" in the sky from about 8pm every day.

This is because Jupiter is directly opposite the sun from Earth's point of view - a phenomenon called the Jupiter Opposition. An opposition refers to when a planet lines up with Earth and the Sun in a straight line.

It will also have a brightness of around -2.6 in magnitude.

Astronomers use the term apparent magnitude to describe how bright an object appears in the sky from Earth - the lower the magnitude value, the brighter the planet. A full Moon has a magnitude of -12.6.

On Friday night, about 100 astronomy enthusiasts snapped up tickets for an event at the Science Centre Observatory to view Jupiter through the telescopes provided.

This was also the first night that members of the public were able to catch Jupiter, Saturn and the Moon aligned. This occurs when the Moon is in a waxing gibbous phase.

Jupiter will appear brighter due to its closer proximity and Saturn will be a redder shade. 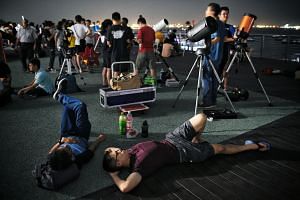 With a telescope, they were also able to look out for Jupiter's four largest moons.

Lucky stargazers during this period may also be able to see the Great Red Spot, a high pressure region in Jupiter's atmosphere that produces the largest storm in the solar system, the spokesman said.

Ms Chen Lijuan, a 48-year-old teacher, told Lianhe Zaobao that she and her 14-year-old son turned up for the Science Centre event, as they have always been curious about the vast universe.

She added that they hoped to gain a better understanding of the Jupiter Opposition and the Jupiter-Saturn-Moon alignment.

He wrote: "It's an excellent time for stargazing!... Another fun holiday activity with your kids (though it may be a bit past their bedtime), or perhaps an interesting idea for a romantic date!"

The Science Centre spokesman said that it is possible to catch a glimpse of Jupiter from almost anywhere in Singapore, with darker locations that do not have trees or high-rise buildings, such as neighbourhood parks, providing ideal stargazing spots.

Those who miss out on this astronomical event need not fret, as at least one of the four brightest planets - Venus, Jupiter, Saturn and Mars - is visible at various times of the year, the spokesman added.

Uranus and Neptune, while also visible from Singapore, are seldom seen due to their distance from Earth.

This unusual sighting - the first in 20 years - happens when the Moon covers the Sun's centre, leaving the Sun's outer edges visible in a "ring of fire".

The public can visit the Science Centre Observatory Facebook page for the latest information.