SINGAPORE - The force was strong at Ion Orchard on Friday (Sept 1) as cohorts of young Padawans swung and thrust their lightsabers as they trained to become a Jedi.

Equally eager were their parents who made sure to immortalise the 30-minute experience through photos and videos.

The training sessions held in the outdoor event space in front of Ion Orchard is part of the 10-day Star Wars: Experience The Force festival which ends on Sept 10 - in line with the school holidays.

The festival culminates at the Singapore Toy, Game & Comic Convention on Sept 9 and 10, an annual ticketed event dedicated to pop culture and entertainment.

The queue for the first 30-minute Padawan training, which is free and will run till 9pm, started about an hour before the session was scheduled to begin at 3pm. The Jedi trainees were taught to make several moves with their lightsabers, including how to block attacks.

At Ion Orchard, fans can get up close to the Millennium Falcon spaceship at the mall's outdoor event space. The Falcon has been famously steered by Star Wars heroes such as Han Solo and Chewbacca. 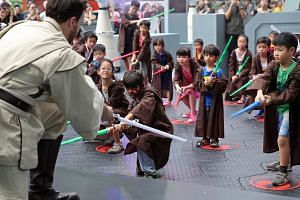 Installations of the towering AT-ST Walker and the AT-ACT Walker have also been placed along the outside of Ion towards Shaw House.

It was a family affair for chemist Grace Teo, 35, who was at the festival with her husband and three children. Her two elder children, a son, eight, and daughter, four, attended the Padawan training.

"We came half an hour early on purpose to queue for the 3pm session. The kids

were very excited and didn't even mind waiting in the heat," she said.

"I want to be Yoda (a legendary Jedi Master from Star Wars," said Ms Teo's son, Ryu, eight, who added that he likes the way the character flips around as he battles his opponent.

Also at the festival as a family were banker Divij Chopra, 38, and his wife and two sons.

The Star Wars fan claims he has watched the older Star Wars movies from the original trilogy screened in the late 1970s and early 80s over 20 times.

"While the Star Wars galaxy is complete fantasy it is still relatable. It is about politics, right and wrong, good vs evil and at the same time it is such a visually different world that allows people go into a dreamland," said Mr Chopra.

To add to the experience, his son Vihaan, seven, had his painted to look like Darth Maul, an evil Sith Lord from the Star Wars world.

But Vihaan favourite character is none other than hero Jedi Luke Skywalker.

"Because he is a very good Jedi," he said.