The lyrics "Stand up for Singapore" took a literal turn last evening when spectators at the Padang spontaneously rose to their feet, time and again, moved by the emotion of marking the nation's 54th birthday.

The National Day Parade (NDP), which also marked the bicentennial of an event that changed Singapore's history, turned out to be an occasion to express gratitude and respect. The mood seemed to wash over the 27,000-strong audience at the Padang, where Singapore held its first NDP in 1966.

Like every year, the crowd stood up solemnly when President Halimah Yacob arrived, when the National Anthem was played and when the Pledge was recited.

Gratitude for the Merdeka Generation - those born in the 1950s and who comprised the earliest batches of national servicemen - was particularly evident when 39 of them appeared as part of a mobile column.

As the 171 vehicles from the Singapore Armed Forces and the Home Team drove past, the masters of ceremonies asked spectators from the Merdeka Generation to stand up so that others in the crowd could acknowledge them. This they did with roaring applause, and some felt moved to stand up as well.

Many in the crowd also rose to their feet when sound engineer and music producer Danial Bawthan - who has muscular dystrophy and goes by the moniker Wheelsmith - came on stage with other performers and rapped "Stand up, Lion City, stand up" - from a wheelchair.

Retiree Alvin Lim, 62, said watching fellow servicemen reminded him of his national service years as a signaller. "Seeing how we have progressed from those days makes me proud," he told The Straits Times.

This year's Parade was the first held at the Padang since 2015, with previous years' NDPs held at the Marina Bay Floating Platform and the National Stadium.

The venue was apt, given the bicentennial. The Padang, which has served as a gathering spot for many since the 1880s and has witnessed several historical milestones, was picked to show how far the country has progressed since Sir Stamford Raffles arrived in 1819.

Together with Brunei Sultan Hassanal Bolkiah, Indonesian President Joko Widodo and Malaysian Prime Minister Mahathir Mohamad attending at the invitation of Prime Minister Lee Hsien Loong, spectators and those watching the telecast were shown glimpses of Singapore's history since then.

These included eight floats honouring organisations that have existed since the 19th century and contributed to Singapore's progress. Among them were Singapore Post, Singapore General Hospital and The Straits Times.

At one point, screens played a video showing Singapore's first mobile column in 1969, which featured only 18 AMX-13 tanks. Pride must have swelled in the hearts of many as they looked on at the size of the mobile column last night. 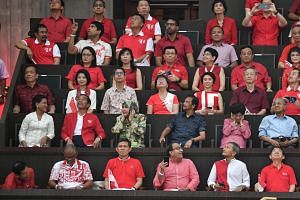 During the show segment, tribute was paid to Singaporeans who have made a difference, such as retired healthcare adviser Iris Verghese, who had reached out to Singapore's first Aids patient in 1985 amid a climate of fear.

The Parade ended on a soulful note with a unique rendition of Majulah Singapura by 66-year-old rock pioneer Ramli Sarip. Right behind him was 25-year-old Wheelsmith.

Amid uncertainties about the global economy and friction between major powers, the image of a young man in a wheelchair and a seasoned senior singing the National Anthem sent a powerful message about Singaporeans' commitment to unity and harmony.

Right after, Stand Up For Singapore blasted through the speakers again as part of a medley, and the crowd was back on its feet, united in song.

A version of this article appeared in the print edition of The Straits Times on August 10, 2019, with the headline 'Stand up, stand up for Singapore'. Subscribe
Topics:
More
Whatsapp Linkedin FB Messenger Telegram Reddit WeChat Pinterest Print Purchase Article Copy permalink