Stakeholders joined forces yesterday to devise ways to boost low recycling rates, which are failing to keep up with the rising amounts of waste produced here.

Representatives of government agencies and environmental groups, as well as business owners, gathered for a panel discussion to find ways to make Singapore a zero-waste nation. The key points included defining manufacturers' role in waste management, as well as social behaviour and policymaking.

The event was organised by Japanese multinational Ricoh Asia Pacific and held at Ricoh Printing Innovation Centre in Penang Road.

It was attended by National Environment Agency (NEA) chief executive Tan Meng Dui, executives from firms such as Johnson & Johnson and Deloitte Singapore, and representatives from the non-profit Zero Waste Singapore and sustainability publication Eco-Business.

Mr Tan said the NEA will provide the policy, regulatory and legislative framework to support the adoption of a circular economy. However, he added, individuals and businesses can play their part by building a strong 3R - Reduce, Reuse, Recycle - culture and "adopt a zero-waste mindset in all that they do".

Domestic recycling rates here were 22 per cent last year, far behind countries such as Germany and South Korea. 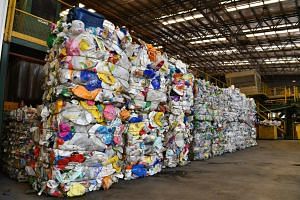 6 in 10 S'porean households recycle regularly, though misconceptions about the process remain: Surveys

The amount of waste generated annually has risen sevenfold over the past 40 years or so, with Singapore's only landfill on Semakau Island projected to reach maximum capacity by 2035, a decade earlier than expected.

Mr Tan said the zero-waste masterplan would be launched later this year.

Its three focus areas are electronic waste - or e-waste - as well as food waste and packaging waste.

E-waste can harm the environment if improperly disposed of, while food and packaging have high waste generation and low recycling rates.

Mr Tan added that the Extended Producer Responsibility programme will come into effect by 2021.

This will compel producers of electrical and electronic equipment to collect their products for recycling or disposal at the end of the items' lifespans.

These will include items such as batteries, lamps and large household appliances, including electric scooters and power-assisted bicycles. Up to 90 per cent of e-waste will be covered by the scheme.

Mr Tan said the notion of a zero-waste nation would be more feasible if it could include ways to manage incinerated rubbish, such as using it for road construction instead of adding it to landfills.

Eco-Business managing editor Jessica Cheam said: "I think that this is a crucial conversation because if you look at global trends in waste generation in the world right now, there is no longer the luxury of exporting your waste or exporting the problem."

She added that countries should look inward to come up with responsible waste management solutions, and that the pioneers of these solutions could generate business opportunities.

A version of this article appeared in the print edition of The Straits Times on May 31, 2019, with the headline 'Stakeholders share ideas for a zero-waste S'pore'. Subscribe
Topics:
More
Whatsapp Linkedin FB Messenger Telegram Reddit WeChat Pinterest Print Purchase Article Copy permalink