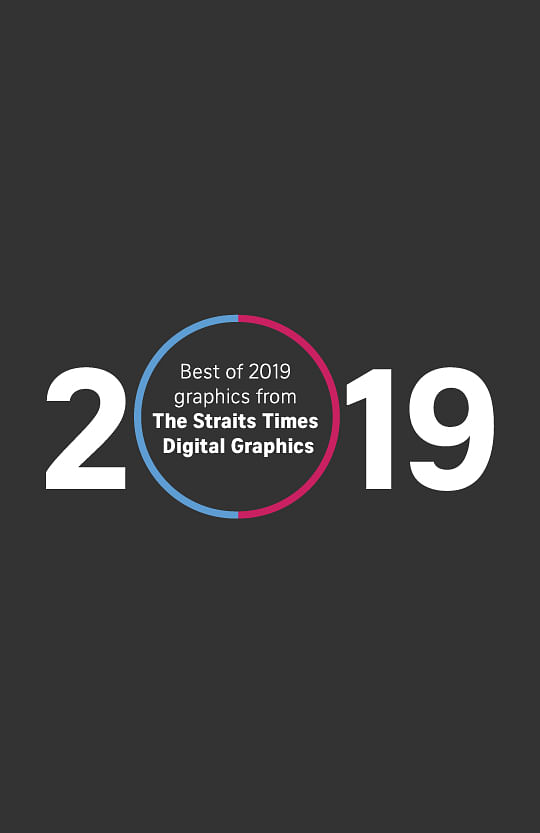 1. Interactive: A guide to Singapore’s Primary 1 registration for 2020 This interactive used data for Primary 1 registration from the past 13 years to come up with a forecast on how likely it is that a school will enter the balloting stage, based on the number of applicants in past years.

Parents could also input into a simulation widget their choice of school and the phase under which they intended to register their child.

Based on the number of applications the school received under the different phases in previous years, parents received information on the chances of their child landing a place in the school. This interactive allowed readers to join her on the nine-hour, 2,439km journey across eight stations from West Kowloon to Beijing through this interactive.

With videos, photos and text, it brought to life the highlights of each of the eight stops. What do fruits, flowers and British royalty have to do with roads here?

Plenty, if you take a closer look at the more than 3,000 streets across Singapore today via this interactive. As the nation marked its bicentennial this year, ST traced the country's rich and storied past through this data-driven project on street names. While several songs, such as Home by singer-songwriter Dick Lee, remained favourites years after their release, other songs received mixed reactions and even stirred up debate. Readers could explore interesting facts about these NDP theme songs, and look into what made them stick with Singaporeans. Artificial intelligence (AI) – or a technique that allows machines to learn from enormous sets of data – has marched into almost every aspect of our lives without us even knowing.

This interactive quiz assesses how ready people are to yield control of their lives to AI, which has moved into homes, streets and workplaces.

6. How we uncovered a love scammer’s three-month ruse

From the United States to Singapore, love scammers have conned their victims of millions of dollars.

For three months, a Sunday Times team went undercover to flush out one such scammer who posed as a civil engineer heading for work in Malaysia.

7. What the Budget tells us about Singapore's economic transformations Over the years, Singapore’s Budgets have reflected the phase of economic development at home and external trends shaping the global economy.

Ahead of Budget 2019, ST took a look at some key policies that were rolled out over the decades, marking major turning points for the Singapore economy.

Readers feeling up to the task of managing Singapore's expenses also challenged themselves in a new interactive game titled Who Wants To Be The Finance Minister?.

8. Hong Kong protests: A family divided, a mum in anguish

With the Hong Kong protests gaining worldwide attention, ST zoomed in to the anguish of a mother who has different views from her sons on who to support.

The interactive looked at the price families are paying as members of the same household supported different sides, creating a divide. It also looked at key moments from the months-long protests.

9. Inside the Istana: An immersive guide to the President's official residence Readers could experience the sights and sounds of one of Singapore's most well-known landmarks - all without taking a single step onto its grounds.

They could even see the main Istana building up-close in augmented reality (AR), as part of a new multimedia website created by ST in collaboration with the Istana. In the last decade, meth has become Asia’s drug of concern. This interactive looks at the story of just one of many in a region that has seen seizures of the drug increasing year on year.

The interactive is part of a deeper look at South-east Asia’s drug problem. Besides exploring the cannabis conundrum facing Asia, reporters also followed the Thai police to track the route of smugglers on the Myanmar and Thai border.