Interactive graphic on names of over 3,000 roads taps data from 2015 linguistic street map

What do fruits, flowers and British royalty have to do with roads here? Plenty, if you take a closer look at the more than 3,000 streets across Singapore today.

As the nation marks its bicentennial this year, The Straits Times traces the country's rich and storied past through a newly launched interactive graphic on street names here.

The data-driven project reveals Singapore's colourful history through the names of its streets, which have today doubled since the estimated 1,600 in the 1960s.

The names reveal throwbacks to British colonial times, a stunning array of Malay words and other surprising references.

For instance, near Beauty World MRT station alone, there are six streets named after different kinds of bananas.

Users can explore a map, and even zoom in on some of the streets in their neighbourhood to find out the origins of the names.

They can also learn about streets here named after people, including how many of them were British queens and princesses, and why some streets simply have numbers. 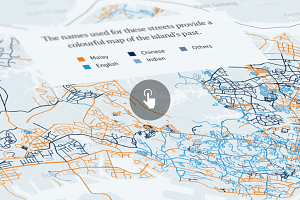 The interactive graphic taps data from a linguistic street map of Singapore created in 2015 by data scientist and Massachusetts Institute of Technology graduate Michelle Fullwood.

They are Singapore Street Names: A Study Of Toponymics by Mr Victor R. Savage and Ms Brenda Yeoh, and What's In The Name? How The Streets And Villages In Singapore Got Their Names by Mr Ng Yew Peng.

Ms Pazos said that this was the most tedious aspect of the entire process, but seeing the project come to fruition has been rewarding.

A version of this article appeared in the print edition of The Straits Times on July 10, 2019, with the headline 'ST traces the road to S'pore's storied past'. Subscribe
Topics:
More
Whatsapp Linkedin FB Messenger Telegram Reddit WeChat Pinterest Print Purchase Article Copy permalink