Apart from reading about interesting people and places in Singapore in The Straits Times (ST), you will soon be able to watch videos on them too.

Readers will also be able to watch a Web series on inspiring young Singaporeans and a documentary on little-known places.

From Dec 5, ST will be launching a series of digital video programmes under an inaugural partnership between the Info-communications Media Development Authority (IMDA) and the paper's parent company, Singapore Press Holdings (SPH).

The partnership, which is part of a pilot Public Service Broadcast (PSB) initiative, was announced yesterday by IMDA chief executive Gabriel Lim at the opening reception of the Singapore Media Festival.

Under the initiative, SPH will produce and distribute a total of 10 programmes across its multimedia platforms, including ST, AsiaOne and Stomp. 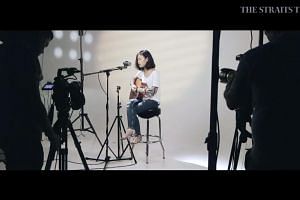 Six programmes will be in English, and the remainder in Mandarin. Each episode will be three to eight minutes long. They will focus on local content and cover key themes that include current affairs, culture, sports, entertainment and lifestyle.

Mr Lim said the convergence of infocommunications and media presents fresh opportunities to showcase and deliver compelling content to a wider and more digital savvy audience.

"We hope our collaboration with SPH, known for its strength in factual content, will continue to encourage Singaporeans to watch and appreciate local productions," he said.

First to be launched tomorrow will be InstaScram, a 24-part fortnightly travel show in English that features "Instagram-worthy" heritage locations in Singapore. It is produced by SPH Razor, a local lifestyle video site.

The other five English programmes will be helmed by the team at ST.

They include anchor series AskST, which will feature experienced ST journalists answering readers' questions on a range of topics like health, finance and cars.

There is also ST Sessions, a programme on local musicians, and Living City, a documentary on interesting and little-known places in Singapore.

Among the four Mandarin programmes to be produced is Why It Matters, a video animation series that will break down major global issues into infographics and illustrations, and explain their relevance to Singaporeans.

"We are pleased to be working with IMDA to contribute meaningfully to Singapore's Public Service Broadcast (PSB) media ecosystem."

Said Mr Warren Fernandez, editor-in-chief of SPH's English, Malay and Tamil Media Group and ST editor: "Our multimedia newsroom now produces many compelling videos every day, and this collaboration will enable us to do even more of them. Our aim is to bring stories to life not just in words, but also videos our audience can turn to on demand."