SINGAPORE - Singaporeans have spoken and Bishan's adorable otter family is their pick to represent the country on its 51st birthday.

The Straits Times published a list of 50 objects that represented aspects of Singapore's history in 2013. This year, the paper invited readers to vote for what they thought should be the 51st object in an online poll launched on July 17.

More than 12,000 readers visited ST's microsite A History Of Singapore In 51 Objects to cast their vote over 20 days.

They were given five objects to choose from: the otters, Singlish for the buzz it created with entries in the venerable Oxford English Dictionary, the ubiquitous thumb drive invented by a Singapore company, the reliable Singapore passport and Cannes-winning film Ilo Ilo.

While it was initially a close fight between Singlish and the otters, the latter ultimately raced ahead in the last week of voting and garnered just over 40 per cent of the vote. 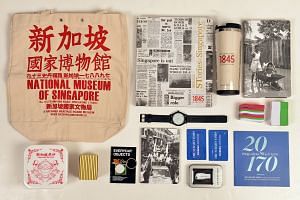 What would you pick to represent Singapore at 51?

Singlish finished second with about 25 per cent, while nearly 22 per cent of the voters plumped for the Singapore passport.

Ms Louise Jane Cher, who voted for the otters, found it "incredibly endearing" to see and hear news of the little otter family growing - and even thriving - in Singapore's compact urban space.

"They almost represent some form of togetherness that we can aspire to," said the 23-year-old Ms Cher, who works in advertising.

"It's incredible that these wild animals can roam free without being annoyed by humans (for the most part), and even be a common topic for all of us to fawn over."

Housewife Mavis Soh, 40, voted for the otters after being struck by how family-oriented they appeared in public, reminding her of many Singaporean families.

She said: "They are a tight-knit family and look out for each other, which is what Singaporeans are all about - helping each other regardless of race, language or religion."

Ms Cher and Ms Soh were among the 10 lucky winners selected by The Straits Times to receive a goodie bag which includes a pair of two-week subscription passes to the paper's digital products.

Worth more than $180 each, the goodie bags also contain collectibles from the National Heritage Board.

Reacting to the news of the otters' win, local enthusiast group OtterWatch said in a Facebook post on Sunday (Aug 7) night that it was "truly an honour" for the otters to be selected.

Illustrations of all 55 objects on  ST's microsite were drawn by designers Teo Yu Siang and Teo Yu Sheng, both 25, who are known for their website Building Singapore which documents 50 significant buildings.

Curators from the National Museum of Singapore also contributed to the microsite by selecting objects from the museum's collection to be featured.