The Straits Times (ST) ranked third among local brands most well-received by Singaporean consumers in the YouGov study on overall brand health, marking the second year running it is in the top 10.

Mr Lucas Tok, marketing and retail lecturer at Singapore Polytechnic, gave his take on why ST made the list. "There are alternative sources of news but their credibility is still being constantly debated, especially with the rise of fake news."

He added that brands like Singapore Airlines (SIA) and ST are trusted by Singaporeans as they have been around for a long time. SIA was formed in 1972 following the separation of Malaysia-Singapore Airlines. ST, which has been serving readers for 173 years, was launched in 1845.

ST editor Warren Fernandez said: "For us in ST, branding is all about being close to our readers and being very much a part of the community we serve. That way, we are able to reflect issues that are relevant to them.

"This is why we have stepped up our efforts to engage with the community - from the ST Run, to our Coffee Festival, to movie nights, concerts and forums on issues that matter to our readers, such as fake news or global affairs.

"We are thankful to our readers for their strong support for these community programmes, which project the ST brand," added Mr Fernandez, who is also editor-in-chief of Singapore Press Holdings' English/ Malay/ Tamil Media Group. 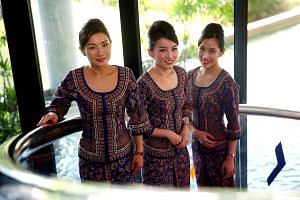 Last Sunday, ST's concert and carnival at the park with the Singapore Symphony Orchestra drew a crowd of some 15,000 people to the Botanic Gardens.

The ST Singaporean of the Year award, launched three years ago to recognise ordinary Singaporeans who do extraordinary things in the community, has also gained much support.

Other local brands on the list include POSB Bank and DBS Bank.

A version of this article appeared in the print edition of The Straits Times on August 04, 2018, with the headline 'ST is No. 3 among local brands'. Subscribe
Topics:
More
Whatsapp Linkedin FB Messenger Telegram Reddit WeChat Pinterest Print Purchase Article Copy permalink