Before country can navigate 'dangerous new world', it has to get domestic conditions right

If Singapore is not successful or united, there would be no foreign policy to speak of.

But because it is, "we are in the happy position where... Singapore will never be intimidated or bought", Foreign Minister Vivian Balakrishnan said yesterday.

Referring to the current world order where many nations are embroiled in fractious politics, he said answers to such problems do not lie in foreign policy.

"You better get the chain of causality right. Fix your domestic conditions first. Create a fair and just society, give everyone hope, equip every Singaporean with the skills needed so they know they have a fair chance of a better future. Then we can have good politics," he added. "Once you have settled that, you can work out how we can navigate this dangerous new world that is unfolding."

Dr Balakrishnan was speaking at a dialogue at the Singapore Perspectives 2019 conference at Marina Bay Sands, organised by the Institute of Policy Studies (IPS).

On maintaining domestic consensus on foreign policy, he said the Cabinet spends "an enormous amount of time" working through the options. He then briefs other parliamentarians, including opposition MPs, about the next course of action.

"Based on my experience so far, no gap, no party politics has intervened with our pursuit of foreign policy," he said.

Based on my experience so far, no gap, no party politics has intervened with our pursuit of foreign policy... I'm going to do my darnedest to maintain this bipartisan consensus... We cannot afford the kind of raucous to-ing and fro-ing that often happens in many other countries. So it's better to take (the opposition) somewhat into confidence, argue it privately, than to display disunity in Parliament.

"I'm going to do my darnedest to maintain this bipartisan consensus... We cannot afford the kind of raucous to-ing and fro-ing that often happens in many other countries. So it's better to take (the opposition) somewhat into confidence, argue it privately, than to display disunity in Parliament."

The Workers' Party has, on this front, played its part, he said.

During the dialogue, Dr Balakrishnan was also asked how Singapore can remain neutral in an ongoing politicised race between the United States and China to develop and roll out the fifth generation of mobile communications, or 5G.

"We need the ability to say no from time to time in a principled and disciplined way," he replied.

"We can't simply be more obliging just because someone is a friend or in a position to exercise leverage against us. Once we compromise or oblige in an unprincipled manner, believe me, the next request will come in fast and furious, and people will expect you to compromise." 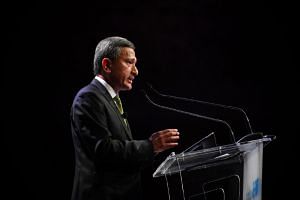 Singapore must remain open to stay relevant in the face of digital disruption: Vivian Balakrishnan

IPS deputy director Gillian Koh asked the minister why the authorities did not name the state behind the recent SingHealth cyber attack.

"The more relevant question is, given that this is the state of the world... what shall we do about it?" Dr Balakrishnan said.

Beyond technical steps such as encryption and Internet separation, which are already practised, he pointed to the need for more education: "The weakest link is still a human being, and you cannot take humans out of human systems."

He later added: "We decided that simply naming names is not going to make our system secure... It may be of interest to the public but not in the public interest."