Rather than limit free speech, it boosts quality of public discourse, she says

An Economist article on Singapore's fake news law has drawn a rebuttal from Singapore's High Commissioner to the United Kingdom Foo Chi Hsia.

In a letter published on the magazine's website this week, Ms Foo stated that the Protection from Online Falsehoods and Manipulation Act (Pofma) does not limit free speech - rather it enhances the quality of public discourse.

She added that the law "strengthens and safeguards proper public accountability that must necessarily underpin democracies".

"Online posts that have been corrected remain available in full, but with links to the Government's response appended," she said.

"Readers can see both and decide for themselves which is the truth. How does twinning factual replies to falsehoods limit free speech?"

Ms Foo was responding to an article published on Dec 7, which characterised Pofma as an addition to the Singapore Government's "criticism-suppressing arsenal" and referenced two recent uses of the law.

The first use of Pofma was against opposition politician Brad Bowyer, who had questioned the independence and investment decisions of Singapore's sovereign wealth fund GIC and investment company Temasek.

The London-based Economist wrote that while Mr Bowyer's post had contained errors - on which the authorities "seized" - its main contention that the Government's investments were not as well managed as they could be "is clearly a subjective matter".

The second use of Pofma was against socio-political website States Times Review, which alleged that the Republic's elections are rigged and that the next one could "possibly turn Singapore into a Christian state".

Meanwhile, Mr Bowyer's post "did not only question the 'investment nous of Singapore's sovereign wealth funds', but was based on false allegations of losses that never occurred", she added. 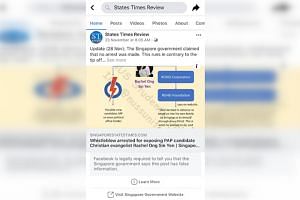 Rights to free speech not hit by use of fake news law: Ministries

Five questions you may have about the new 'fake news' law

Pofma: Is Singapore's fake news law too powerful or not enough?

The High Commissioner noted that fake stories have influenced British politics, "notably in the Brexit campaign".

She added that legislatures around the world have been grappling with this problem.

Singapore, as an English-speaking, multiracial and multi-religious society open to the world, is more vulnerable to the threat of online falsehoods than most, she said, reiterating a point made by the Republic's Ambassador to the United States in a recent letter to The Washington Post.

"Having observed in Britain and elsewhere the cost of doing nothing, we decided to act."

She added: "Singapore's laws are designed to meet our own context and needs. We have no ambition to set any example for other countries, but neither do we make any apologies for defending our own interests."

The Washington Post ran a Dec 2 article on Pofma, in which it quoted Human Rights Watch's deputy director of Asia division Phil Robertson as saying the law is designed "specifically to put Internet companies like Facebook in a headlock to comply with these rights-abusing edicts", among other things.

Singapore's Ambassador to the United States Ashok Kumar Mirpuri subsequently wrote a letter to the Post to rebut its article, which the newspaper ran parts of.

On Monday, an official from the Ministry of Communications and Information sent a letter to Mr Robertson reiterating the Government's offer to debate Pofma with him at any university forum in Singapore and livestream the exchange on Facebook.

The letter also reiterated how Human Rights Watch had been invited to appear before the Parliamentary Select Committee on Deliberate Online Falsehoods last year.

It had originally accepted the invitation but declined after being told it would also be questioned about a report issued in December 2017, which stated that the Singapore Government was suppressing freedom of expression.

The organisation was offered eight alternative dates and the option of speaking via video-conference but repeatedly came up with excuses to decline, the official said.

Mr Robertson could not be reached by The Straits Times for comment.