Singaporeans need to understand the region better for the country to add value as a springboard or gateway when partnering those who want to enter the South-east Asian market, Trade and Industry Minister Chan Chun Sing said on Wednesday (Nov 28).

"We can only truly do that if our people have a deep sense of perspective of what the region is about, the diversity of the region, so that we can value-add when we partner people who want... to work (here).

"We need to do much more," he added, noting that students he meets are often able to name a good number of American states, but do not know the provinces or major cities of Indonesia.

Mr Chan was replying to ST associate editor Ravi Velloor on the observation made by some people that Singaporeans tend to focus only beyond the region.

The minister said that even as Singaporeans continue to head to more established markets such as the United States, Europe or China, they should maintain a sense of balance by knowing what is happening elsewhere.

"I have met (leaders from) many multinational companies... who say that if our people want to reach the highest leadership echelons in their big companies, they will need to have market knowledge not just of Singapore and the established cities of the world, but also some of the emerging markets.

LOOK AT EMERGING MARKETS TOO

I have met (leaders from) many multinational companies... who say that if our people want to reach the highest leadership echelons in their big companies, they will need to have market knowledge not just of Singapore and the established cities of the world, but also some of the emerging markets... That is where opportunities start.

"That is where opportunities start," he said, adding that schools have a part to play by sending students on trips to countries in the region.

In response to another question from moderator Zakir Hussain, ST news editor, Mr Chan said he would like to see Singaporeans take paths less travelled and return with good ideas on how lives here can be improved.

Having such a perspective is important for Singapore, given that the more successful a country is, the greater its tendency to focus on internal affairs rather than larger forces at play globally, said Mr Chan.

"For Singapore to continue to be successful, we must never allow ourselves to only focus internally."

Asked how Singaporeans can avoid being left behind as other countries develop rapidly and on a larger scale, Mr Chan said that technological developments will not be linear, and emerging technologies will allow less developed nations to leapfrog ahead of more developed ones. 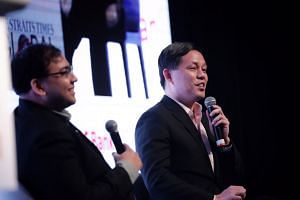 Singapore, he said, must be aware of its weaknesses and strengths, which include its long-term perspectives and strategies, as well as rule of law and predictable business environment where people can thrive.

These must be upheld, he added.

"If we are not determined enough, there is absolutely no reason why someone else would not take away our lunch," he said.