Singaporeans need to be open and understanding of foreigners - whether immigrants or workers and students from other countries - so that they have the confidence to interact with people of all races, languages and cultures from around the world, said Finance Minister Heng Swee Keat.

It will be very negative for Singaporeans to draw an exclusive circle for themselves as Singapore would then have no place in the world, Mr Heng told about 700 students attending a ministerial dialogue at Nanyang Technological University (NTU) yesterday.

"We don't want a world where people build walls around themselves," he said to laughter.

"Our pledge - regardless of race, language or religion - is not to be taken lightly… but really as a way of life for Singapore.

"Beyond that, we ought to deepen our understanding of other people... whether they are new immigrants, our immediate neighbours, students from NTU, National University of Singapore or other universities," he said.

Mr Heng also encouraged students on exchange programmes to interact and learn from others.

The need for Singaporeans to have an open mindset and a multicultural outlook was one of his key messages at the two-hour forum, during which he was questioned on a raft of issues, including population growth, technological disruption and meritocracy.

WAY OF LIFE FOR SINGAPORE

We don't want a world where people build walls around themselves. Our pledge - regardless of race, language or religion - is not to be taken lightly… but really as a way of life for Singapore.

On the projected population of 6.9 million by 2030, set out in the Government's 2013 Population White Paper, Mr Heng said the number goes beyond how densely populated Singapore would be. The social space is as important.

Singapore's population density is not excessive, he said, noting that other cities are a lot more crowded in terms of liveable space.

He cited former chief planner Liu Thai Ker, who said in 2014 that Singapore should plan for 10 million people for it to remain sustainable in the long term.

Giving an account of a constituent who was not comfortable with having foreigners working in his company, Mr Heng said there lies a "difficult trade-off" of integration Singaporeans have to make.

"On the one level, many Singaporeans understand, rationally, we should have more people join us because our workforce is declining.

"But at the same time, emotionally, we don't feel comfortable that there are people who appear a little different from us and I would like to keep this to my circle. This almost tribal feeling is a very deep one," Mr Heng added.

Quoting the saying "Teochew nang kaki nang" - which translates to "Teochew people, we are the same people" - Mr Heng said it makes sense to retain some form of identity and culture in multicultural Singapore, but Singapore must not propagate the notion that only people exactly like us are our people.

On the economic front, Singapore needs to be open as well. Noting that Singapore should not be too narrow in its development of deeper skills and innovation, he said: "Asia and the world are our hinterland, and how we can add value and create value - not just for Singapore - but for the entire hinterland, will define our market. 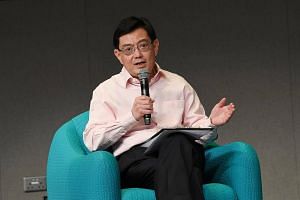 "And with e-commerce, the market is no longer selling door to door. If you have a great product that can be on a great e-commerce site, you sell around the world."

Mr Heng also encouraged the students to interact with those from other countries, as this will create more opportunities for themselves in the future.

"In your university days, it is the time when it is best for you to really meet your future partner," he quipped, saying it was where he met his wife.

Asked about technological disruption and artificial intelligence, he said some routine tasks can and should be automated but more complex ones will require human empathy and creativity.

He cited educational technology, saying that while machines can replace repetitive tasks that teachers do, education is not just about head knowledge, like numeracy and literacy.

Mr Heng said being able to work together effectively is key, but combining the strengths of people is not straightforward.

"People will always quarrel and have disagreements. How do you make a team productive requires leadership and social skills. Increasingly, I see so many companies - as well as our own public service - assessing our officers not on paper qualifications and IQ, but on how well they work with people.

"I don't believe machines will make us redundant, but I also caution that our willingness to change, to develop new skills so that machines make us even more productive, is going to be a critical task."

To do that, companies must think hard about redesigning jobs and reskilling workers. Students must think of how they can learn any time, anywhere, and from anyone in the years ahead, he said.

He related a story about a candidate in an interview at the Monetary Authority of Singapore - where he was the managing director - who said he wanted the job to learn as much as possible and one day take Mr Heng's position.

"There was no notion of how to want to contribute to the organisation. If you think in that narrow, self-centred way, you will not make progress," said Mr Heng.