Over 30 countries, including US, China and India, will today sign UN treaty named after Singapore

Singapore is well-placed to gain from the United Nations-backed mediation convention that is named after it. The reason boils down to its mediation infrastructure, well-qualified mediators and goodwill brand, Senior Minister of State for Law Edwin Tong said in an interview with The Straits Times.

The rise in demand will follow the signing of the Singapore Convention on Mediation, which will be useful in enforcing settlements of complex and longstanding cross-border disputes through mediation, he added.

Underlining his confidence is the world-class facilities at Maxwell Chambers, that he cited. Another factor that will spur greater use of Singapore mediators is the success rate of the Singapore International Mediation Centre (SIMC).

Also, SIMC mediators have been sent to mediate commercial disputes around the world involving different parties.

He said: "Nothing to do with Singapore, but we export our services. That's a value and also advances Singapore's hub for mediation."

Mr Tong made these points last week ahead of the scheduled signing of the Singapore Convention on Mediation today.

The large number of signatories due to sign the treaty is yet another favourable sign. More than 30 countries will sign it, including economic giants China, India and the United States. At least 30 other countries have sent official delegations to attend the signing ceremony to show their support.

Mr Tong noted that the New York Convention on Arbitration started with only 10 countries but grew to nearly 160 countries in six decades.

More than 30 countries will sign the convention, including economic giants China, India and the United States. At least 30 other countries have sent official delegations to attend the signing ceremony to show their support.

The Singapore convention is, therefore, at "quite a strong starting point", he said yesterday when addressing a forum here titled Mediation: A New Era. It was attended by delegates from various countries.

He also pointed out that when a big trading country, such as the US, China or India, is involved from the start, the counter party from the country that is not a signatory will feel some pressure in coming on board. 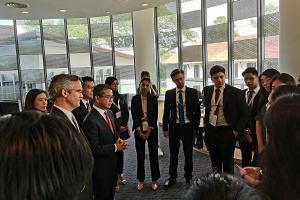 "If I was government of a country where my corporates trade a lot with one of these countries, and mediation is a value proposition, I'd think twice about not being inside.

"So I expect there to also be a strong second, third wave of parties coming on board to ratify."

During the ST interview, Mr Tong pointed out that mediation would be useful for companies and countries in terms of avoiding project disruption and achieving cost reductions.

It allows parties to retain their long-term relationship, he said.

"I've seen many cases where parties enjoyed a fairly long and relatively stable relationship and then sometimes when personnel change, they get involved in dispute. And that breaks the relationship that was not built overnight. That is one type of dispute that will benefit from mediation."

Another type would involve disputes in longstanding projects such as building infrastructure, power plants or a rail system.

Mediation would give the parties "the best chance" of not having the whole project abandoned, and prevent one discrete part of disagreement from derailing the entire process, he added.

"That is why we've been encouraging parties to get on board and sign the convention," he said.

He told the delegates at yesterday's forum that they play an important role in raising awareness of mediation, and in getting more countries to sign the convention.

He expressed confidence that more would come on board when they see the benefits of the new convention in action.

He also said in his address at the forum that much hard work and perseverance went into the establishment of the Singapore convention.

"It started off being quite difficult... there were many delegations, each with their own ideas and experiences on mediation, interests and perspectives on how enforcement should be achieved," he said.