Such interference is an age-old affair, but the Internet has revolutionised this, he says

Pointing out that foreign powers have all along sought to interfere in the domestic affairs of other countries, Mr Shanmugam said the Internet has revolutionised this process.

Such interference can be even more deadly than military force in undermining a country's politics and stability, and every state has the right to protect its national security, he said.

In Singapore's case, its laws should give the Government powers to tackle foreign interference attempts through targeted, surgical interventions, and to investigate and respond expeditiously to hostile information campaigns.

It must also have the power to get information in order to investigate the provenance of content, to see the extent to which it is foreign influenced and respond appropriately, he added.

Such legislation needs to be able to deal with a diverse range of threats, such as the flow of funds, and interference during and outside election periods, Mr Shanmugam stressed.

When it comes to addressing hostile information campaigns online, it cannot be left to technology companies to regulate themselves, he told a conference on foreign interference tactics and countermeasures organised by the S. Rajaratnam School of International Studies.

In his 45-minute speech, Mr Shanmugam outlined examples of how foreign interference has taken place at home and globally, including in the 2016 United States election.

He also spelled out the various methods which foreign interference can take, such as the use of diplomatic channels to subvert and interfere with other states.

The media can also be used, such as via secret funding and control of the publications, and in other cases, having agents use the cover of journalists themselves. 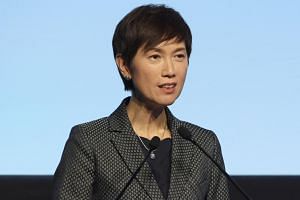 Laws to be strengthened to combat foreign interference in domestic politics and threats to religious harmony: Shanmugam

He noted that foreign interference has been turbo-charged because of the Internet and the almost limitless possibilities it has opened up.

Hostile information campaigns can identify the "protest potential" of any population of the target country, he said. The campaigns seek to create protests which deepen divisions among different groups, and get people to distrust institutions.

But it is the combination of online hostile information campaigns, and offline activities, such as foreign-controlled media and agents of influence, that is extremely toxic and powerful, said Mr Shanmugam.

He cited the example of how this took place in Ukraine, where a foreign country built a narrative that the government was fascist and corrupt. He also cited how online campaigning and falsehoods during the vote on Brexit played on people's anti-Muslim and xenophobic sentiments.

"All that hasn't happened in its full glory in Singapore. But it can happen. Some of it has happened," he said.

The minister said there are attempts to combine the different approaches of foreign interference, and outlined how a group of local activists met Malaysian Prime Minister Mahathir Mohamad last year to urge him to bring democracy to Singapore. Two of them - historian Thum Ping Tjin and freelance journalist Kirsten Han - also started New Naratif, which is funded by a foreign foundation and has received foreign contributions.

He also noted that The Online Citizen website has employed foreigners to write almost exclusively negative articles on Singapore matters, including inflammatory pieces that seek to fracture social cohesion.

"Foreign interference is an age-old threat which has adapted to modern technology," he said. "This is an issue of sovereignty and national security. The governments have to lead from the front, and we need to ensure that we have the right tools to fight this threat".