It is generally not allowed in public discourse to preserve racial, religious harmony and to prevent unrest, violence

Singapore has carved out its own approach as a secular state in dealing with speech that is offensive to race and religion, said Home Affairs and Law Minister K. Shanmugam yesterday.

The country takes the view that offensive speech should generally not be allowed in public discourse in the context of preserving racial, religious harmony and preventing unrest and violence.

When deciding whether to allow or ban something, the authorities assess the reactions of the majority in the targeted community; where the weight of mainstream opinion lies; and whether such content could deepen fault lines or have security implications.

This approach, which has been relatively successful, is guided by common sense and is pragmatic in nature, he said in a ministerial statement on restricting hate speech for racial and religious harmony.

It also tends to function on a case-by-case basis - Singapore does not ban everything that is deemed insulting or offensive by anyone. Neither does it allow everything that is insulting or offensive. For instance, Salman Rushdie's novel Satanic Verses was banned in 1989 - as a result of Singapore's mainstream Muslim community taking offence - but the Government has allowed other books and films even when religious communities were unhappy.

But Singapore has a zero-tolerance policy for bigotry, said Mr Shanmugam, citing cases of foreign and local preachers who were banned and admonished for making racially and religiously offensive remarks.

In 2017, two foreign Christian preachers had their applications to speak in Singapore banned by the Ministry of Manpower, in consultation with the Ministry of Home Affairs. One of them had said Islam is "not a religion of peace".

Similarly, Singapore banned Zimbabwean Mufti Menk, who views it a sin for Muslims to wish non-Muslims Merry Christmas, and Indian-born preacher Zakir Naik, who urged Muslims to vote for a Muslim candidate instead of a non-Muslim during political elections. 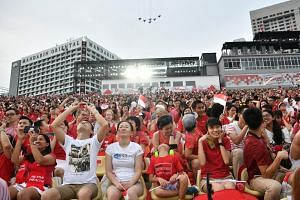 Singapore prepared to 'err on the side of caution' to preserve racial harmony, says Shanmugam

Hate speech may be handled differently elsewhere, but Singapore must be strict on it: Shanmugam

Mr Shanmugam said letting in such foreign preachers, whose teachings are available online, allows them to build a following in Singapore. "Eventually, that can become seriously divisive - like not shaking hands, not greeting each other and not voting for candidates of another race or religion."

He cautioned against allowing divisive rhetoric in religious sermons of the different faiths."These things have a momentum… What do you think the atmosphere will be like in our common meeting places?"

Mr Shanmugam said French absolutist secularity - a hands-off approach in which people can publish material that is offensive to any religion - is unsuitable for Singapore.

He said the Singapore authorities are convinced the European way will not work here. Instead, the secularity Singapore adopts strives in every way possible to achieve racial, religious harmony.

At the heart of it, he said the State's fundamental assurance to the people of Singapore is that they are free to believe in any religion - including not to believe - and that members of faith groups will be protected from hate speech and unacceptable offensive speech.

"We have to decide what works for us. Singapore is only 54 years old this year. Racial, religious tolerance is slowly being rejected in older societies than ours which claim to be liberal. It is prudent for us not to take Singapore's values, unique and new in history, for granted."

Mr Shanmugam also commended New Zealand's rejection of the shooter's message of hate after the Christchurch mosque attacks on March 15 that killed 50 people.

A version of this article appeared in the print edition of The Straits Times on April 02, 2019, with the headline 'S'pore has own approach to offensive speech'. Subscribe
Topics:
More
Whatsapp Linkedin FB Messenger Telegram Reddit WeChat Pinterest Print Purchase Article Copy permalink