The authorities have clarified Singapore's position on the use of pharmaceutical cannabinoid products in the country, saying their presence comes under strict frameworks and regulations and does not diminish Singapore's zero-tolerance position against drugs.

"Our drug control policies are underpinned by evidence and research," said the statement, adding that Singapore must continue to stay drug-free to prevent harm to its population and society.

"Cannabis is clearly addictive and harmful, and there is no scientific evidence of the safety and efficacy of raw cannabis use," it said.

"This supports our position that cannabis should remain an illicit drug. At the same time, we will continue to allow safe and controlled access to evidence-based medical treatment options."

Cannabinoids are chemical compounds found in the cannabis plant.

They can be medically administered through pharmaceutical products such as oral solutions and sprays, said the authorities, acknowledging the potential therapeutic uses of cannabinoids. "There is some published research, derived from controlled clinical trials, on the potential therapeutic uses of cannabinoids to manage seizures and epilepsy," said the statement. 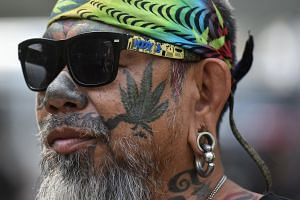 "The team concluded that cannabis consumption is associated with irreversible brain damage, brain shrinkage, and serious mental or psychiatric illnesses," said the statement. "The Singapore Government's stand on illicit drugs, including cannabis, is clear - they are harmful, addictive and can destroy lives, families and communities."

It said examples of other countries have clearly shown that a permissive attitude towards the use of drugs exacts a high cost on society. "Therefore, we have strict laws against the trafficking, possession, consumption, and import or export of illicit drugs, including cannabis and cannabis products."

This comes against the backdrop of countries such as Thailand approving legislation on the use of cannabis for medical purposes last December. Other countries in the region have also reportedly started talks on similar legislation.

In the statement, the ministries said Singapore's "comprehensive and sustained approach" to tackling both demand and supply of drugs has allowed the country to remain relatively drug-free. Last year, the number of drug abusers arrested in Singapore comprised less than 0.1 per cent of its population.