Working together as part of a fictional peacekeeping task force, troops from Singapore and China launched an assault on a building in a counter-terrorist urban raid to take out "enemy forces" yesterday.

Soldiers from the 1st Commando Battalion and the Southern Theatre Command Army of the People's Liberation Army (PLA) set off a demolition charge to force entry into the three-storey building, with others rappelling down from the rooftop.

Two of the Singapore Armed Forces' (SAF) Peacekeeper Protected Response Vehicles arrived soon after to form a protective cordon and evacuate "civilians" from the building.

The simultaneous assault on the Murai Urban Training Facility in the Lim Chu Kang area was the culmination of this year's 10-day Exercise Cooperation, the flagship exercise between the two armies.

This year's exercise, which started on July 27 and ended yesterday, was the biggest one in the series, which was launched in 2009.

About 120 soldiers from each side took part. The participating units were the SAF's 3rd Singapore Division, 1st Commando Battalion, and the PLA Southern Theatre Command Army's 74th Army Group.

At the closing ceremony at Jurong Camp yesterday, Brigadier-General Kenneth Liow, Chief of Staff for General Staff, said in a speech that the exercise has progressed by leaps and bounds since its launch, keeping pace with the positive momentum of the defence relationship between Singapore and China.

"Over the course of these 10 years, Exercise Cooperation has continued to evolve, while serving as a meaningful platform for professional exchanges between our armies in highly relevant and diverse areas: counter-terrorism, infantry, and chemical, biological, radiological and explosive operations," he said.

His counterpart, Lieutenant-General Zhang Jian, Commander of the Southern Theatre Command Army, said the exercise was a practical action in accordance with both sides' agreement to deepen military cooperation.

"It demonstrates our shared will to maintain regional peace and stability. It also conforms to the tide of the times, which is to strive for peace, cooperation and development," he said. 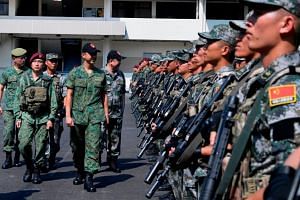 They also honed their competencies in areas such as rappelling, weapon handling, basic demolitions and close-quarter combat.

The exercise was last held in 2014 in Nanjing, China. Both armies then took part in conventional land warfare scenarios and shooting practice, with 70 soldiers from each side.

The exercise director, Colonel Lek Seng Khoon, who is also Chief of Staff for the 3rd Singapore Division, said yesterday after the final mission that its successful execution was a testament to the forces' mutual trust and strong cooperation.

His counterpart, Senior Colonel Zhong Linjiang, from the Southern Theatre Command Army's staff officer department, said: "Of the four exercises in the series, this exercise was the largest, most substantive, and had the deepest cooperation.

"Both sides displayed strong professional standards and fighting capabilities. I hope we can further expand cooperation in future exercises and exchanges."

In May, Defence Minister Ng Eng Hen and his Chinese counterpart Wei Fenghe met in Singapore to discuss the revised Agreement on Defence Exchanges and Security Cooperation. They welcomed Exercise Cooperation as well as Exercise Maritime Cooperation, which will be held by both navies next year.

Corporal Krishanraj Elangovan, 20, from the 1st Commando Battalion, said the PLA troops were high-spirited and kind.

"When we were ahead of them or vice versa, we always waited for each other, so we finished all the training together," he added.