Local barramundi farm Barramundi Asia has scaled up its operations with a new $2 million extension to its nursery.

With this extension, the farm expects to increase its fish production threefold, to almost 1.8 million fish fry per year. That will bring the farm's expected yield to 6,000 tonnes of fish yearly, which is more than what Singapore's 120 fish farms produced last year.

The nursery, located in the south of Singapore on Pulau Semakau, now has 1,200 sq m more space and the addition of eight giant 50 cubic m tanks.

This extra space for rearing fingerlings will raise the farm's production capacity to 150,000 fish a month, up from its previous capacity of 50,000 fish monthly.

Singapore imports more than 90 per cent of the food consumed in the country, according to figures from the Agri-Food and Veterinary Authority (AVA).

But last year, only 9 per cent of all the fish eaten in Singapore was produced locally.

The farm hopes that this extension will produce more barramundi, which is called jin mu lu in Chinese or ikan siakap in Malay, and is a popular fish on the menu in seafood restaurants. 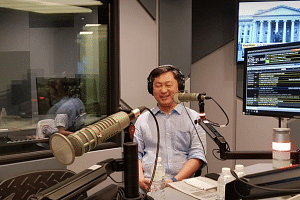 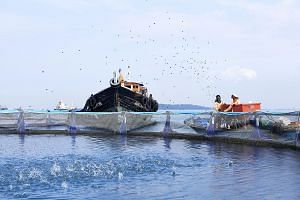 Fishing for tech solutions to make feeding a breeze

The new extension to the fish farm's nursery was unveiled by Minister for the Environment and Water Resources Masagos Zulkifli yesterday. "As a city-state that imports more than 90 per cent of our food, Singapore is vulnerable to external shocks and developments that impact food supply," he said at the official opening on Pulau Semakau.

"Growing local will help us reduce our dependence on imports," he said, adding that local farms can harness the latest technologies to overcome resource constraints.

He also said farms can tap the AVA's Agriculture Productivity Fund to co-fund technology that could boost farm productivity.

Barramundi Asia is one such beneficiary, where bits and bytes are very much part of the production chain.

With this system, water from the fish tanks will be treated and then recirculated. Compared with simple filtration systems, this not only saves water, but also allows for tighter control over its quality.

Other machines on the farm include a semi-automated fish grading machine, which sorts fish according to their size, a process previously done completely by hand.

There is also an expanded hatchery, which will allow the farm to be fully self-sufficient, from production to distribution.

By hatching its own fry, the company, which is Singapore's largest producer of sustainable, fresh barramundi, will be able to control the fish's entire life cycle - from egg to farm, and finally to fork.

As part of this production chain, a barramundi at the farm will be born at the hatchery, grown in the nursery and be transported to the sea cage farm, where it can grow to full size. It will then be processed and marketed under the company's brand, Kuhlbarra.

Mr Joep Klein Staarman, co-founder and managing director of Barramundi Asia, said: "The extension of the nursery and implementation of new technologies bring us closer than ever to achieving Barramundi Asia's vision of becoming the world's largest supplier of sustainable barramundi.

"Additionally, the increase in scale achieved with the extra fingerlings going to the sea allows us to use automation to achieve cost reduction and economy of scale."

The company intends to have a semi-automated vaccination machine at the nursery in two mon-ths and a fully automated feeding system for the fish at sea in three months.