In all, six Memorandums of Understanding (MOU) and one Strategic Framework Agreement were signed and exchanged on the sidelines of the 14th Joint Council for Bilateral Cooperation (JCBC) meeting held at the St Regis hotel.

Among them were deals to replicate the government-to-government project, Tianjin Eco-city; exchanges and collaboration between artists and art groups from both sides; the setting up of a National University of Singapore research institute in Chongqing; and cooperation in emerging industries such as advanced manufacturing, biomedicine and nanotechnology applications.

The annual JCBC meeting is the highest-level platform to discuss cooperation between Singapore and China. This is the first time that Mr Han is attending as co-chair, after his predecessor, former vice-premier Zhang Gaoli, retired last October.

Mr Han is a member of the top decision-making body in China, the Chinese Communist Party's seven-member Politburo Standing Committee.

Both Mr Han and Mr Teo witnessed the signing of the seven agreements after concluding their bilateral meeting. They also attended meetings that took stock of the progress of the three government-to-government projects: Suzhou Industrial Park, Tianjin Eco-city and Chongqing Connectivity Initiative.

The seven deals are:

1. A joint work group, comprising senior government officials from Singapore and China, will be formed to oversee the implementation of an MOU signed to promote the replication of the Sino-Singapore Tianjin Eco-city's development experience in other Chinese cities, and in future, along the Belt and Road regions.

2. The Ministry of Trade and Industry and the Suzhou Municipal People's Government signed an MOU to deepen exchanges through attachment of Singapore government officials to Suzhou. The attachment programme aims to enhance people-to-people linkages through areas like training and the sharing of public administration experiences. 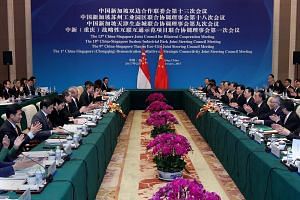 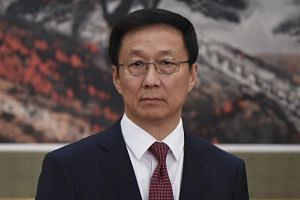 3. An MOU was exchanged to facilitate the training of senior officials from both countries to reaffirm the longstanding relations between Singapore and China and to deepen the cooperation under Singapore's third government-to-government project with China - the China-Singapore (Chongqing) Demonstration Initiative on Strategic Connectivity.

4. National Arts Council and the China National Arts Fund signed their first MOU to strengthen exchanges in the arts, and to encourage collaboration between artists and to develop new creative work for audiences in both countries.

It is to serve as a base for NUS to conduct education and scientific research, along with technology transfer and commercialisation activities, which will strengthen Sino-Singapore cooperation in western China.

The institute will "serve as an important gateway for NUS to extend our reach in the western region of China", Professor Ho Teck Hua, NUS senior deputy president and provost, said in a statement.

6. An MOU to cooperate in entrepreneurship, innovation and commercialisation was exchanged between Enterprise Singapore, Agency for Science, Technology and Research, and Suzhou Industrial Park Administrative Committee.

The parties will work together to grow Singapore and Suzhou start-ups and to develop partnerships in emerging industries such as advanced manufacturing, biomedicine and nanotechnology applications.