A total of 120 "fortune bags" were given out to seniors from the Care Corner Senior Activity Centre in Woodlands yesterday, as part of a Singapore Press Holdings (SPH) annual event to spread festive cheer to the community.

Mr Archimedes Rodil, a software engineer from SPHTech division, dressed up as the God of Fortune. "I found it extra interesting because I'm not Chinese," he said.

"Peeping through the small holes in the costume, I could see the joy and hope in the eyes of the seniors. They rushed to shake my hands, embrace me and put their arms around me," said the 39-year-old Filipino, who has been working in Singapore since 2010.

"It was worth all the sweat and heat while inside the costume."

More than 60 senior citizens and 20 volunteers attended the event organised by SPH's Staff Volunteers Club. Seniors from the centre who did not turn up for the event also received a bag each.

The SPH Cares With Bags Of Love event also comprised a bento lunch, memory games, musical performances by the volunteers and a lucky draw. 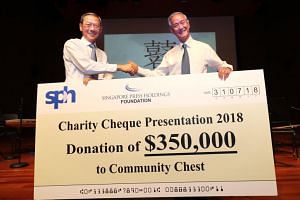 The volunteers themselves received a surprise too.

The senior citizens prepared a special lohei and put up a short performance of Chinese New Year songs.

Ms Chin Soo Fang, head of corporate communications and corporate social responsibility division at SPH, said: "We had not expected the senior citizens to make the time and effort to reciprocate and show their appreciation with their lohei and performance.

"They have touched our hearts, just as we have warmed theirs."

Care Corner Singapore is a non-profit organisation established in 1981. It has 33 service centres islandwide reaching out to the isolated and disadvantaged through their extensive social services. Target groups include youth at risk, lonely seniors and children with special needs.