Singapore Civil Defence Force (SCDF) officers are highly regarded for their life-saving skills, with most either specialising in tackling raging blazes or providing emergency ambulance response.

But a small group has now been trained as both paramedics and firefighters, in line with the force's push to have its personnel respond to different kinds of incidents.

There are now around 10 officers who started out as paramedics and were later trained in firefighting.

After their stints in the two areas, many of them went on to work in policy-related roles, making use of knowledge gained on both fronts.

Lieutenant Yeo Ren Jie, 30 - who was a paramedic for six years, completed his training as a senior fire and rescue officer last year.

Knowing both operations has allowed him to integrate the different skills and is helping him to make decisions on the ground as a rota commander at Yishun Fire Station, a role he took on about a month ago.

"For example, when firefighters extricate a person, the medical side (paramedics) takes over. Now, it's about blending them together."

For example, in a recent road-traffic incident, he recalls having to free a man trapped in a car. 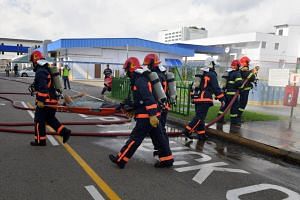 Parliament: SCDF officers to get more powers and protection in rescue operations

"Besides managing the process of extricating him, I knew I also had to watch out in case of spinal injuries. That was when I realised that knowing both sides is very important."

Training as both a paramedic and firefighter has also helped him to better assess the impact each action has on casualties at a scene.

"All these require split-second decisions. The better you are trained in both fire and medical (skills), the better a decision you can make," said Lt Yeo.

While the role of a firefighter is generally still perceived as more dangerous than that of a paramedic, Captain Amelia Justina Lim, 37, begs to differ.

"As a firefighter, you're managing a big group and a large incident scene that can change any time," said Capt Lim, an emergency medical services (EMS) team leader at the 3rd SCDF Division.

"As a paramedic, your incident scene is smaller because you might focus on one patient, but it's equally dynamic. And in both, you have to rise to the occasion."

There are now around 10 officers who started out as paramedics and were later trained in firefighting. After their stints in the two areas, many of them went on to work in policy-related roles, making use of knowledge they gained on both fronts.

When she began training as a firefighter in 2015, after six years as a paramedic, it took some time to assuage her mother's worries.

"Eventually, she was supportive, but her initial reaction was quite different from when I first told her that I wanted to be a paramedic."

For Major Janice Oh, 41, making the switch from ambulances to fire engines was an exciting journey, and the nine months of intensive firefighting training was a learning experience, she said.

"I even enjoyed the residential training and things like booking out (leaving for home after staying at camp for a period of time) and getting dirty."

Maj Oh, the assistant director of the force's EMS Readiness department, was the first paramedic to be "cross-trained" as a firefighter in 2005.

She currently oversees the force's EMS tiered-response framework, which was implemented in 2017, and deploys resources according to the severity of a medical incident.

"Having been at the front line in both roles puts me in a better position to make decisions," she said.

"The job and the skill set of paramedics and firefighters might be different, but the mission of the SCDF as a life-saving force still remains the same."