SINGAPORE - India was among the first few countries to officially recognise Singapore in August 1965.

A special gift of the front page of Tamil Murasu dated Aug 11, 1965, that carried the news of the recognition was presented to visiting Indian Prime Minister Narendra Modi by Prime Minister Lee Hsien Loong on Tuesday (Nov 24) at the Istana. 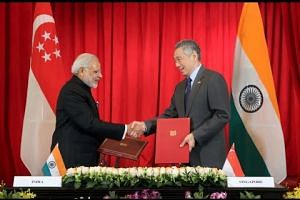 The two-paragraph story in Tamil said that India has officially announced that it acknowledges the newly independent Singapore, and that then-Indian prime minister Lal Bahadur Shastri had made the announcement in a message to his counterpart Mr Lee Kuan Yew.

The Straits Times also carried the news that India and other countries officially recognise Singapore and establish diplomatic relations.

In an article published on Aug 13, 1965, it quoted Mr Shastri as saying: "On behalf of the government and people of India, I send you, Mr Prime Minister, our sincere good wishes for the happiness and prosperity of the people of Singapore.

"We look forward to the development of close and friendly relations and mutual co-operation in many fields between India and Singapore."

Read the English translation of the Tamil Murasu article below.

New Delhi - Aug 11 - India has officially announced that it acknowledges the new rule in Singapore.

According to agreement, Singapore has separated from Malaysia and Malaysia's Parliament has endorsed this.