SINGAPORE - A future in which the South-east Asia region is split in two, between rich elites and millions of the poor, is the biggest fear of academic Farish Ahmad-Noor.

The frightening picture he paints shows a small cluster of plural, cosmopolitan "cafe-latte drinking, sushi-eating" elites "swimming on a sea of 600 million poor South-east Asians" who are not mobile and have no access to mobility.

An associate professor at the S. Rajaratnam School of International Studies, he made the point during a panel discussion on diversity and identity at the Singapore Bicentennial Conference.

Fellow panellist Brenda Yeoh, of the National University of Singapore, noted that families in the region were becoming more diverse.

"I am a bit bemused by the fact that we talk about South-east Asia as though it's out there. Aren't we in South-east Asia, and isn't South-east Asia here, in us, with us?" said Professor Yeoh, who leads research on Asian migration at the university's Asia Research Institute.

She noted many families in Singapore also see cross-marriages with people from Thailand or Vietnam.

Agreeing, Prof Farish said he was speaking as a Malaysian married to a Singaporean of Indonesian origin. "I don't have to look for Asean, it's at the dinner table every time I go back," he quipped.

But he warned against seeing such cross-border marriages as a panacea and to remember that such marriages are not just between elites.

"We do not celebrate these marriages when they are among the working classes," he said. "That is the kind of slippage, the silencing that we need to be cautious about."

Both academics were speaking on the second and last day of the conference held at Raffles City Convention Centre.

In his presentation, Prof Farish said the region's multiculturalism was far richer before colonialism, and pointed to the need to adopt a regional, Asean identity and embrace its complexity. 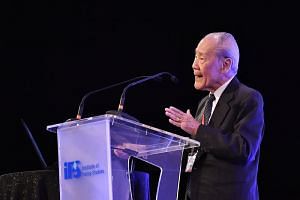 Arrests of left-wing forces a condition for Singapore becoming part of Malaysia in 1963, says historian

The hero we need: Hang Tuah the 'model' South-east Asian

Prof Yeoh traced a history of diversity in Singapore, noting possible reflections of colonial attitudes in how Singapore treats its migrant workers today.

The issue animated the audience, who raised points ranging from "new colonialism" in the treatment of marginalised groups to tensions between a regional identity and a national one.

She said: "If we are going to be inclusive... it is time we accept these people as they are, without making them feel they are not good enough for our society."

Prof Yeoh said Singapore needs to "look into the looking glass of history" at the kinds of value systems the colonials had.

In her presentation, she talked about a "pride and prejudice" mentality among colonials that left little room for mixing or difference. And she asked whether Singapore today may be approximating some of these attitudes.

"Think carefully, whether these sorts of values should be... ones we adopt for our current context, whether this is to do with race diversity, or diversity to do with sexuality."

Prof Farish, replying to a participant, said a sense of citizenship does not necessarily negate other identities, while pointing out that South-east Asia is one of the most culturally complex parts of the world.

"While natural identity and citizenship are important because it gives you another level of belonging and attachment, it cannot and should not negate your other identities as well," he added.

While not naming specific countries, he said some parts of Europe have a form of extreme secularism, and that Asean should not one day make people choose between their country or being religious.

Professor Kishore Mahbubani, former dean of the Lee Kuan Yew School of Public Policy, noted an "underlying optimism" in the points made by the two panellists.

"In a world where multiculturalism is being challenged, how can South-east Asia still remain optimistic that it will be positive and successful in this dimension?" he asked.

Prof Farish replied that he was a pessimist, but also a realist. "Stop harping on states and expecting states to perform miracles."

States, however powerful, cannot compel their citizens to love one another, he said.