SINGAPORE - While more and more young people are seized by the green movement, there is a need for countries and companies to act urgently on the grave risks to sustainability, Senior Minister and Coordinating Minister for Social Policies Tharman Shanmugaratnam said yesterday.

The window is closing fast before there is irreversible damage in living standards for future generations and loss of animal and natural life on the planet.

In his opening address at an international sustainability symposium yesterday, Mr Tharman urged countries and companies to invest in innovations that are more energy efficient and less destructive to the environment.

Without innovation from industries, governments will be left to rely on "very large punitive actions: very high (carbon) taxes or regulatory actions to curb inefficient demand and supply", he added. But such actions reduce growth and make it harder for poorer countries to uplift themselves.

He said the majority of the world's population is still developing and it would be naive to think they would be willing to give up on development.

He said: "We need innovations that will provide a real alternative for people. Innovations in every sphere of life will reduce that trade off between sustainability and growth."

While people may think of vehicle emissions and industrial activity as the main culprits behind global warming, the minister noted about 15 per cent of green house gas emissions come from just meat and dairy alone, fuelled by land clearings and methane emissions during production, and it was "critically important" to create a sustainable eco-system of food production and consumption. 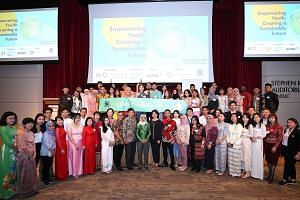 Getting youth more involved in sustainability

In his address, NTU president Professor Subra Suresh highlighted two studies by the United States National Academy of Engineering and concluded that many challenges of the 21st century are direct consequences of the 20th century's greatest engineering achievements.

"Cities occupy only three per cent of the land on earth, but they account for 65 to 80 per cent of energy consumption and 75 per cent of carbon emissions," he said.

Part of the answer is to change people's habits of consumption, and for different disciplines to come together to come up with innovative solutions. He said: "This is a great opportunity for us to integrate economics with engineering, social sciences with natural sciences and technology in ways which we have not done to address this problem."