SINGAPORE - A stream of red and white bags moves down a neat line, as a team of soldiers fills them with items including LED wristbands, Singapore scarves and snacks.

This has been a common sight for the past week at Kranji Camp 3, where 280 soldiers from the Singapore Armed Forces (SAF) have been working to get this year's National Day Parade (NDP) funpacks ready.

Since June 20, they have clocked 12 hours a day to ensure that the 300,000 funpacks needed for five upcoming parade shows will be completed in about two weeks.

Spirits were high among the 5th Battalion, Singapore Infantry Regiment (5SIR), which was split into nine packing teams.

Each is led by a platoon sergeant and three section commanders to ensure that the 18 items that go into each funpack are assembled and replenished on time.

They also do the first round of quality control checks to replace damaged bags and items. The bags are later checked by 15 other soldiers a second time.

This year, the teams have been organised at the platoon level to boost spirits among the soldiers, according to Commanding Officer of 5SIR Derrick Yeaw Guan Sim.

"We are a young battalion currently six months into our training," he said. "This is a good opportunity for the men to do this with their commanders and build cohesion within the platoons." 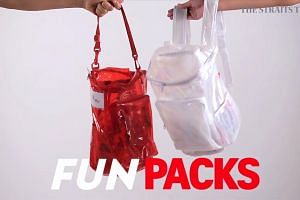 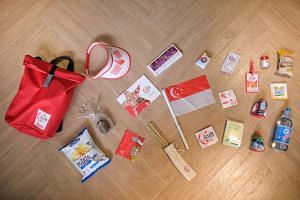 To motivate them to hit the daily target of 27,000 funpacks, the soldiers were asked to suggest ways to improve the packing process.

Ideas included changing the order of items being packed for a smoother flow and playing music to alleviate the monotony of the task.

For full-time national serviceman Leong En Yi, working on the funpacks may not seem as "glamorous" as marching in the parades, he said, but it remains an important contribution to the nation's birthday bash.

"When I was in primary five and watching the NDP, getting the funpacks and discovering what was inside was very exciting," the 19-year-old recalled. "If I can bring this joy to the kids this year and to those going for the NDP, it is meaningful for me."

Their involvement has also given the soldiers, who come from different backgrounds, a chance to get to know one another better, according to full-time national serviceman Abdul Haziq Adzhari, 19.

And while he often feels tired in the day from fasting during Ramadan, he added: "I feel blessed to have friends who are understanding, such that they avoid drinking or eating in front of us."

Paradegoers will find their funpacks placed at their seats this year, instead of having to grab them at collection points. About 320 soldiers will be roped in to transfer the funpacks from Kranji Camp 3 to the National Stadium at least two days before a show.