All 20 Singapore Management University (SMU) students who were injured in a bus accident during a community service project trip to Vietnam last Saturday have returned home safely.

Four of them had to return to Singapore by air ambulance, said SMU in a statement yesterday. Two of the students - one of whom had a hip fracture and the other a leg fracture - reached home on Tuesday. The other two arrived in Singapore on Monday. One had a neck injury while the other had a leg fracture.

All four are in stable condition and being treated in hospital.

Of the remaining 16, 15 returned to Singapore yesterday while one is a Vietnamese who returned to his home in Vietnam.

The students were part of a group of 30 who were in the Vietnamese city of Hue for the fourth edition of Project Phoniksa, launched by the university's Rotaract Club.

The first of two buses, which was ferrying 20 students, hit a kerb and all of them were flung off their seats.

Ten other students in the second bus escaped injury, with seven of them extending their stay in Vietnam for another two days to assist and support their peers. They have all since returned to Singapore.

"When the first bus had the accident, those in the bus behind it immediately went to assist their fellow peers. Over the last few days, they've been helping their fellow students through all the medical processes - we're very grateful to them for the fantastic support." 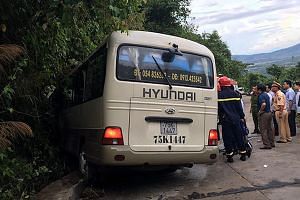 He, along with university staff, counsellors and doctors, met the students and their parents at the airport upon their arrival to reassure them of the university's continued support and assistance.

SMU added in its statement yesterday: "We understand that the local authorities have not concluded their investigation into this road accident and await the official investigation report.

"Our focus now is to help all our students get the appropriate treatment, care and rest, so that they can be on the road to recovery."

A version of this article appeared in the print edition of The Straits Times on May 15, 2019, with the headline 'SMU students back in Singapore; four in hospital'. Subscribe
Topics:
More
Whatsapp Linkedin FB Messenger Telegram Reddit WeChat Pinterest Print Purchase Article Copy permalink