SINGAPORE - Transport operator SMRT has announced a series of improvements to its app and stations in an effort to improve commuters' experience.

SMRTConnect has been updated to include bus services from all operators, not just SMRT ones, the company announced on Monday (Feb 5).

There are also plans to provide electronic travel slips through the app from the middle of this year, which can be used as proof of travel during train breakdowns.

Other improvements include better real-time display of train arrival times, which can be accessed by tapping an MRT station icon on a map.

The app is linked to the improved train signalling system to provide more accurate timings and even provides a gauge of how crowded trains are on all North-South, East-West, and Circle line services.

Initiatives in stations include newly-designed device-charging kiosks with digital screens showing train arrival times. These feature at 30 stations along the North-South and East-West lines.

Four-sided information panels showing ticketing and other information are also being trialled at Tanjong Pagar, Somerset and Bugis MRT stations. 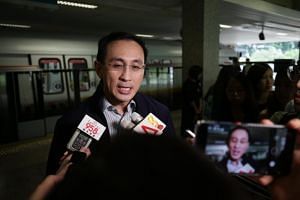 The SMRT app was launched in 2012 and the latest updates were made last Thursday. The previous version has been downloaded more than 500,000 times.

SMRT chief executive Desmond Kuek said: "From all the feedback received, the biggest bugbear for our commuters is that they do not receive accurate journey information about arrival and waiting times, especially when there is a delay.

"We understand the frustration of our commuters, and will fix this."

It is hoped the new SMRT app will benefit the company's staff as well as commuters.

Assistant station manager Kuldip Kaur, 60, who has been with the company for 28 years, said the recent improvements have helped to reduce the number of repetitive questions she faces.