SINGAPORE - Rubbish bins could one day be used to measure how clean the air is or how many people pass by an area.

Mr Jason Kumar, co-founder of technology firm Terra Sol, said advances in sensor technology have made bins smarter, and he does not rule out having bins with those capabilities.

His company on Tuesday (Nov 15) launched smart bins that can act as Wi-Fi hot spots, turning the stretch between Wisma Atria and Mandarin Gallery into a free Wi-Fi zone for pedestrians.

The bins are also solar-powered, have sensors that tell their cleaners how full they are, and come with compactors which give each bin up to eight times the capacity of a normal bin, among other features.

"There has definitely been more market awareness and interest here since we first brought in the bins at the start of last year," he said. 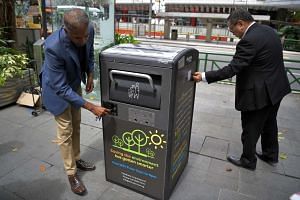 Currently, the firm is running five separate trials with close to 20 bins in locations such as Fusionopolis in Buona Vista and CleanTech Park in Jurong West. It has sold 15 units in the last year.

Mr Sanderson Soh, Otto's senior sales manager, said people were initially less receptive to such bins due to their cost. But as the bins have shown they can help raise productivity, "more organisations have come knocking on our doors wanting to find out more".

Mr Soh also noted a rise in inquiries for smart bins, by 50 to 60 per cent over the last nine months.