Deliberately slowing down Singapore's economic growth will not help tackle inequality, but will instead make everybody worse off, Manpower Minister Josephine Teo said yesterday.

"It will have the harshest impact on the bottom," Mrs Teo said. "Jobs will be lost and incomes will fall for those at the lower end of the workforce while, at the top end, those with the talent or entrepreneurial ability to seize opportunities elsewhere will up and go."

She was speaking at a panel discussion during a conference organised to celebrate the 30th anniversary of the Institute of Policy Studies at Marina Bay Sands.

She pointed out that slowing down growth "so that those behind can catch up" may sound like an intuitive solution to inequality, but the evidence suggests the reverse.

Much of Singapore's growth since 2000 took place between 2004 and 2007, when its gross domestic product grew by an average of 8 per cent yearly.

Median income adjusted for inflation grew by 20 per cent during that decade, and "virtually all" of it happened during that four-year period.

"By going for growth when the conditions allowed, we offset the downturns we experienced earlier in the decade," Mrs Teo said.

"In the process, we reduced unemployment and raised wages for Singaporeans after the standstill in the first part of the decade." 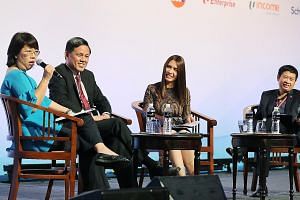 Aim to be anti-elitism, not anti-excellence, urges Chan Chun Sing

She added that slow growth will not ensure a more equal society as long as Singaporeans live in a globalised world.

Her comments came after Deputy Prime Minister Tharman Shanmugaratnam said on Thursday that to tackle income inequality, Singapore must first ensure that everyone in society - including those in the middle class - continues to progress. He gave the analogy of being on an escalator, which has to keep moving so that everyone is better off.

The labour economist, an associate professor at the Singapore University of Social Sciences, said the basic problem is that income inequality "has a very high chance of reproducing itself".

Addressing this problem will mean that we have to weigh the trade-offs, he said.

"A completely redistributive society is going to fail. So, too, will a society that fails to ask those who are better off among us for more.

"We have to weigh the trade-offs. There is a real cost to having an unequal society."

Mrs Teo also addressed calls to implement a minimum wage, saying it could lead to lower levels of employment as not all employers would want to employ workers at that rate.

Schemes like the Workfare Income Supplement, which provides support to the bottom 20 per cent of workers, achieve "the same uplift as a minimum wage".

"But there is a crucial difference," she said. "The cost is borne by the Government, with no risk of inducing unemployment or illegal employment of such workers."

Note: The story has been edited for clarity.