SINGAPORE - A self-confessed slow learner, Wang Junyong found little to interest him in school until age 15 when he took up Taiko drumming, a dynamic form of Japanese percussive drumming.

The Normal (Technical) student soon developed discipline and confidence as he took part in one performance after another.

When he completed his ITE education at age 18, he knew the path ahead: to spread his Taiko passion. But for eight years, he could not obtain any entrepreneurship grant to get his Mangrove Learning venture up and running.

His inexperience and difficulty in writing business proposals as well as scepticism towards his unconventional ideas were insurmountable until 2016, when he received a $20,000 grant from the Philip Yeo Initiative (PYI).

A ground-up movement administered by NUS Enterprise - the entrepreneurial arm of the National University of Singapore (NUS) - it is to honour Mr Philip Yeo, a former top public servant famed for his audacious mentorship style, and to create a platform for him to develop people and talent.

On Friday night (March 22), in a rousing nod to Mangrove Learning's thriving business, which provides Taiko lessons to seniors, youths-at-risk and people with special needs, Mr Yeo, 73, took part in a lively three-minute Taiko performance with a dozen others, at PYI's fifth anniversary celebration at the NUS Kent Ridge Guild House.

PYI was started in 2013 by several of Mr Yeo's proteges who wanted to support individuals with projects that would contribute to society.

Mr Wang, now 29, recounting the social stigma attached to students who did not shine academically, said he was inspired initially to persist in his mission when he saw first-hand the effect of Taiko on seniors with dementia.

He was conducting a three-month programme of weekly lessons at the Aljunied community centre.

"Initially, they were reluctant to even pick up the drumsticks but as the lessons progressed, they transformed from a reserved group into a circle of close-knit, fun-loving drummers,'' he told The Straits Times. 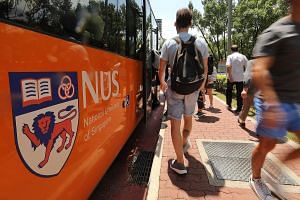 NUS to take in more poly grads with entrepreneurial abilities

Singapore should teach all children how to be an entrepreneur

His uncommon but inspiring story is a recurrent tale among the PYI associates, who proudly live by the "MAD COW" spirit, which stands for "Make A Difference, Change Our World".

It is a jokey acronym, reflective of the sense of exuberant adventure found as well in Mr Wang's fellow associates, like 26-year-old Debra Lam.

In 2012, she co-founded Deaf Dragons, a dragon boat team for persons with physical and intellectual disabilities. It evolved into Society Staples, a social enterprise for improving the quality of life for persons with disabilities (PWDs) - by providing customised training for businesses to make them more inclusive.

"I hope I can help to establish a new gold standard for inclusive activities, and encourage other vendors developing programmes for PWDs to follow suit," said Ms Lam who got $40,000 from PYI.

Other associates at Friday's dinner include Mr Kenneth Lou, 27, co-founder of Seedly, a personal finance app targeted at helping Millennials better manage their finances. It has raised about $100,000 from East Ventures, DBS, and NUS Enterprise.

In all, 18 associates and fellows have received $440,000 since PYI started supporting innovators.

Mr Ritchie Ng, a self-taught computer programmer who applied for the PYI Fellows Programme in 2017, received $20,000 for his first start-up Adaline, a company that applied AI to medical imaging.

The diversity and creativity of the PYI associates is what makes it stand out among the host of entrepreneurial programmes in Singapore, said Mr Wang.

Lamenting the traditional investor focus on projections and hard numbers, he added: "PYI invests more in the people, not the project."