SINGAPORE - Six tobacco retailers who sold cigarettes to minors under the age of 18 have been suspended from selling tobacco products for six months, the Health Sciences Authority (HSA) said in a statement on Wednesday (Oct 10).

The suspensions took effect between July and September this year. Among those hit by the penalty are two 7-Eleven outlets at 639 Punggol Drive and 319A Anchorvale Drive.

The authority had caught the errant retailers via ground surveillance and enforcement activities to deter the illegal sale of tobacco products to under-18 minors.

It said the retailers did not ask for identification to check the buyers' ages. The shops had claimed that they were too busy or that the minors looked older than they actually were.

In one case, one of the shops was caught selling tobacco to a minor, aged 17, who was buying the product for a 14-year-old.

"Sellers take the risk of contravening the laws if they assess age by mere physical appearance of the buyer," said the HSA.

Tobacco retailers are reminded that they are responsible for all transactions of tobacco products taking place at their outlets, as well as the actions of their employees, the authority added.

The minimum legal age to use, possess or buy tobacco products will be raised to 19 years next year. 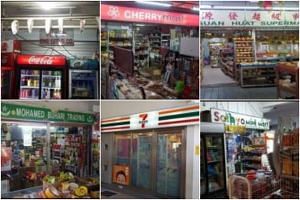 One retailer's licence revoked, five others' suspended for selling cigarettes to minors: HSA

Under current laws, anyone convicted of selling tobacco products to a minor below the age of 18 can be fined up to $5,000 for the first offence.

In addition, the tobacco retail licence for the seller will be suspended for six months for the first offence, and revoked for the second offence.

However, if the buyers are minors dressed in school uniform or below 12 years old, the outlet's retail licence will be revoked, even the first time round. Since 2015, the HSA has suspended 79 retail licences and revoked 11 others.

The public is reminded not to supply any tobacco products to under-18 minors, the HSA said. Anyone convicted of buying or acquiring any tobacco product for minors can be fined up to $2,500 for the first offence, and up to $5,000 for subsequent offences.

Meanwhile, anyone convicted of giving or furnishing any tobacco product to a person under the age of 18 can face a fine of up to $500 for the first offence and $1,000 for subsequent offences.

Since 2015, 18 individuals have been caught for such offences.

Members of the public who have information on the illegal sale or supply of tobacco products to minors can call the Tobacco Regulation Branch on 6684 2036 or 6684 2037 during office hours, the HSA said.