SINGAPORE - SingPost has launched a set of zodiac rat stamps to commemorate the Year of the Rat this Chinese New Year.

The postal service provider will also be lowering rates for mail stamped from Saturday (Jan 4) to Jan 25, the first day of Chinese New Year.

The new stamp collection marks a new cycle of SingPost's zodiac stamp series, as the rat is the first animal sign in the Chinese zodiac cycle.

Members of the public can buy the stamps, which feature two illustrations of the rat, from next Wednesday.

The rat stamp issue is designed in a similar style as the rest of the stamps in the zodiac series that will be released in subsequent years until the 12-year zodiac cycle ends in 2031, SingPost said on Thursday.

The entire series of stamps was illustrated by artist Lim An-Ling, who also designed the 2019 Singapore Bicentennial stamp sets.

Ms Lim, who is an animator and illustrator, has been designing stamps for SingPost since 2013.

The rat-themed stamps can be purchased at all post offices, the Philatelic Store @ GPO and online at shop.singpost.com

Members of the public can also buy them at the SingPost booth at the River Hongbao 2020 festival held from Jan 23 to Feb 1.

The set of mint stamps comes in two denominations: 30 cents and $1.40.

Pre-cancelled first-day covers affixed with the complete set of stamps and cancelled with a special zodiac rat postmark are available at $3.10 each. 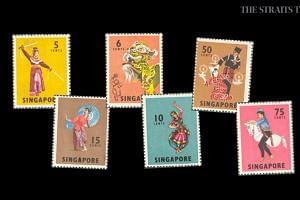 SingPost launches zodiac stamps to mark Year of the Pig

Presentation packs consisting of both stamps in a holder will be sold at $4.15 each.

Collector's sheets with commemorative $10 stamps go for $18.80 each.

The special stamp sheets, with a design inspired by the Chinese tradition of paper-cutting, will be sold in a folder along with a set of eight red packets.

The collector's sheet is designed by designer Andy Koh, who has been designing stamp issues since 2000.

Other SingPost items on sale include a diagonal decorative stamp encased in a frame, other rat-themed products and a limited-edition stamp miniature sheet that features a reunion dinner scene.

Postage labels that are bought at select SAM kiosks at the General Post Office from next Wednesday will also feature a limited-edition Chinese New Year design.

A full list of zodiac-themed products can be found at the Philatelic Store @ GPO and at SingPost's online shop.

Leading up to the festive season, SingPost will also be offering discounted postage rates for people who are sending greeting cards within Singapore and to overseas addresses. The festive rates will apply for all stamped and franked greeting cards posted between Saturday and Jan 25.

For example, during this period, the rates for non-standard size greeting cards sent to a local address will be 30 cents and 37 cents for cards weighing up to 20g and 40g respectively, down from the regular postage rate of 60 cents.