SINGAPORE - The impact of the destructive Panama disease on bananas in Singapore appears muted, for now.

The Agri-Food and Veterinary Authority (AVA) told The Straits Times that Singapore's supply of bananas is currently stable.

"Singapore imports bananas from various countries including Philippines, Malaysia, Ecuador, Vietnam and India. The import quantity has increased over the years," said an AVA spokesman.

The Food and Agriculture Organisation (FAO) of the United Nations has warned that the global banana industry is facing "one of the world's most destructive banana diseases". 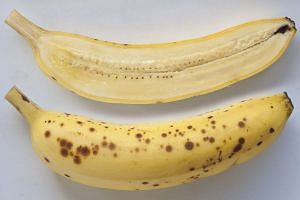 Fungus threatens to wipe out world's supply of Cavendish banana

The main banana type affected by the disease is the Cavendish banana, which makes up 47 per cent of bananas grown worldwide, according to the FAO.

Supermarket chains Sheng Siong and NTUC FairPrice said that their supplies and prices of Cavendish bananas have not been affected.

Even so, FairPrice said that supplies and prices do fluctuate due to demand and supply factors, as well as the weather, like the El Nino effect.

Cavendish bananas make up slightly more than half of Sheng Siong's banana sales volume. The chain said that the supply of Cavendish bananas is "forecasted to be stable, and prices should not be fluctuating too greatly in the short term".

Sheng Siong and FairPrice said they have diversified their sources for Cavendish bananas.

For the longer term, Sheng Siong said it will "continue to monitor" the situation.

"It is difficult to say at this juncture how the disease issue - a known fact - will pan out in the future, as well as its impact," the chain said.

Ms Xie Li Fen, who is in charge of sales at wholesaler Bee Seng Fruit Supply, said she has not heard of the Panama disease affecting banana supply.

She said there was a short supply of Cavendish bananas a few years back but that was due to flooding at the plantations in the Philippines.

The damage caused by this outbreak globally is estimated to cost more than US$400 million (S$539 million).

Bananas are particularly vulnerable to disease because most commercial bananas produced are genetically identical.

Once a plant is infected with the disease, nearby plants are easily contaminated.