SINGAPORE - Singapore's "most handsome" policeman has married his sweetheart, but his new status has not affected his popularity.

The couple's wedding photos and video went viral soon after they were posted on Facebook.

Mr Ryan Koh, 33, who has became the unofficial poster boy for the Singapore Police Force, can be seen at the entrances of many shops in the form of a "shop-theft" standee.

He earned nicknames like "the cardboard policeman" and "Yan Dao (handsome in Hokkien) Policeman", and was also featured in an anti-crime campaign video in early 2015.

His famous standee was featured in the wedding photos shared by Facebook user Tan Shiwei on April 2. 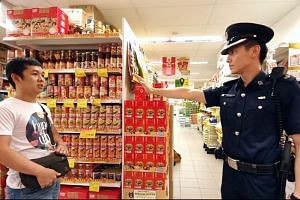 Will the real 'Shop theft is a crime' policeman please standee up?

In one photo, the couple pose with the standee between them, and in another, the bride hugs the stern-faced standee lovingly.

The campaign's slogan "Shop theft is a crime" is printed on the photo.

The Facebook post of the photos has been shared more than 1,500 times since it was posted, and garnered more than 2,300 likes.

A video of the wedding ceremony was shared on the Facebook page of wedding videographer Ark Moments.

Mr Koh serenaded his bride, Sabrina, who is also in the police force, with Taiwanese singer Christine Fan's Mandarin hit You're My Most Important Decision in the near five-minute clip.

His colleagues also "greeted" him with his famous "stop" gesture during the wedding march.

Netizens were thrilled with the photos and video, and many posted cheeky messages and their congratulations to the photogenic couple.

Said Ant Ng: "Congrats to both of them!! Can we have a sign of Sabrina to be placed with Ryan? Lol."

Another netizen Benny Loy Hui Xiong commented: "The only crime that the bride committed was stealing his heart. Congrats to both of them!"

Some commented that he looks quite different in person.

In an interview with The New Paper last year, Mr Koh said that he is rarely recognised in public when he is not wearing a police uniform or that stern expression seen on the standee.

The couple are now on their honeymoon.