MCCY to recruit 100 S'poreans for work group till Feb 21; members can give input on S'pore Citizenship Journey

How should new citizens of Singapore behave? What values, norms and rights should they uphold? What are some of their obligations to the city and their fellow Singaporeans?

Singaporeans will be able to weigh in and shape the mandatory curriculum which new citizens undergo before becoming full-fledged members of Singaporean society.

Yesterday, the Ministry of Culture, Community and Youth (MCCY) launched a recruitment drive for 100 Singaporeans to form a work group to give input on the Singapore Citizenship Journey. Singaporeans can apply online to be part of the work group from now till Feb 21.

MCCY said the work group will be diverse and reflective of Singapore society. While the authorities have taken in feedback from the public over the years, the work group is the first of its kind.

Initially introduced in 2011, the Singapore Citizenship Journey is designed to deepen understanding of Singapore's history and culture via interactive online modules on topics such as the country's national symbols and policies, and experiential learning programmes such as visits to museums.

Culture, Community and Youth Minister Grace Fu, who spoke about her ministry's various initiatives at its annual year-in-review session with the media, said the review is timely as the National Integration Council marked its 10th anniversary last year.

She said: "It is a good process for us to engage Singaporeans and have a common understanding of what a new Singaporean would look like. So we have decided to have an engagement and co-creation process."

She noted that Singaporeans have a lot of views on this topic.

For instance, some have given feedback that becoming a citizen goes beyond simply marrying a Singaporean. Instead, it also involves understanding the Republic's social norms, if they have studied or lived here long enough, or if they have served national service.

All Singapore citizenship applicants aged 16 to 60 who have been granted in-principle approval by the Immigration and Checkpoints Authority, undertake the Singapore Citizenship Journey, which they are given about two months to complete.

Ms Fu said work group participants should expect to be involved in discussion groups from March to July this year. The suggestions could be implemented into the programme from the end of the year. 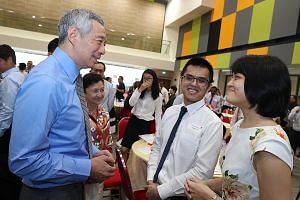 Taking up citizenship is a two-way process: PM Lee

When asked if speaking English should be one of the hallmarks of Singaporean identity, she noted that it will continue to be Singapore's working language so that social and recreational settings are inclusive for all races.

She added: "Unlike many other countries where the language of the major race is used as a national language, we need to use a common language so that all races can communicate with one another.

"But we also affirm the rights for each of the races to have full access to its own language, through our schools and cultural institutions, because we believe mother tongue is the best way to access important values passed down by generations. Also, heritage values are carried through the language."

Separately, she announced participation figures in the arts, culture and heritage sectors. She said 13.6 million people attended arts and culture events in 2018, surpassing the 13.2 million mark for 2017.

Additionally, results from a heritage awareness survey, conducted in 2018 among more than 2,000 Singaporeans, found that 88 per cent of Singaporeans believe it is important to preserve the country's intangible cultural heritage. This was a jump from 74 per cent in 2014.

The Heritage Awareness Survey, which is commissioned every three to five years, also found that close to eight in 10 Singaporeans participated in heritage and cultural activities across 2018.

When asked about MCCY's engagement with the LGBTQ (lesbian, gay, bisexual, transgender, queer) community through its various activities, Ms Fu said her ministry recognises that society is diverse. "We are hoping through all these activities that we hold, that different people will come together and will get to know one another.

"There are areas which are sensitive because they involve very deep-seated values and beliefs, and like many of our activities and our programmes, we do not go out to try to convince one another to change your beliefs or to convert your beliefs."

She said embracing diversity is about looking past differences, coming together to do good and appreciating each other for what each individual brings to society.

• For more information on the work group, go to www.ideas.gov.sg/public/cw_scj

A version of this article appeared in the print edition of The Straits Times on January 17, 2020, with the headline 'Singaporeans to get to shape curriculum for new citizens'. Subscribe
Topics:
More
Whatsapp Linkedin FB Messenger Telegram Reddit WeChat Pinterest Print Purchase Article Copy permalink